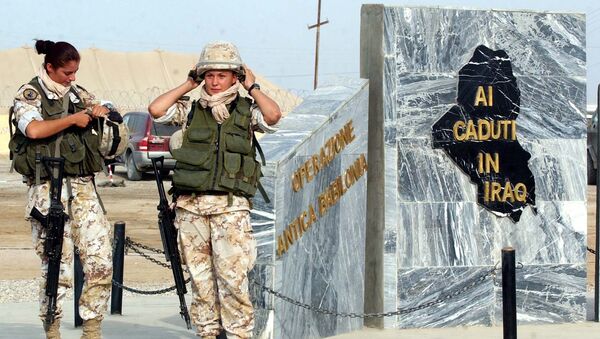 Italian Defense Minister Roberta Pinotti said that Rome will not participate in the anti-ISIL campaign without parliamentary support.

ROME (Sputnik) — Italy is considering expanding its mission against Islamic State (ISIL) militants in Iraq to possibly become involved in coalition air raids, but the step will not be taken without a parliamentary decision, Italian Defense Minister Roberta Pinotti said Wednesday.

"We are assessing the role our Tornado [attack aircraft] could play in the fight against ISIL, together with our coalition partners. But no decision to this effect will be taken without parliamentary support," the minister said at a joint press conference with US Defense Secretary Ashton Carter.

This comment came after media in the country reported on Tuesday that Italian warplanes were to commence airstrikes against ISIL positions in Iraq in the short term. Targets would allegedly be picked in coordination with the US command, which is at the helm of an international coalition operating in the Middle East.

Italy Must Enhance Cooperation With Russia in Countering ISIL
Also Pinotti stated that Italy will not take part in airstrikes against the Islamic State (ISIL) jihadist group in Syria as part of a US-led coalition.

"The situation in Syria differs from that of Iraq," Pinotti told a press conference, alongside US Defense Secretary Ashton Carter.

Following remarks hinting at an expanded role for Italy in the anti-ISIL mission in Iraq, the Italian defense official added that Syria had not requested that Rome join in the air campaign against ISIL.

The US-led coalition of some 60 nations has conducted over 6,500 airstrikes in Iraq since August 2014. In Syria, it has been flying bombing missions since September 2014, albeit without the approval of the UN Security Council or the Syrian government.