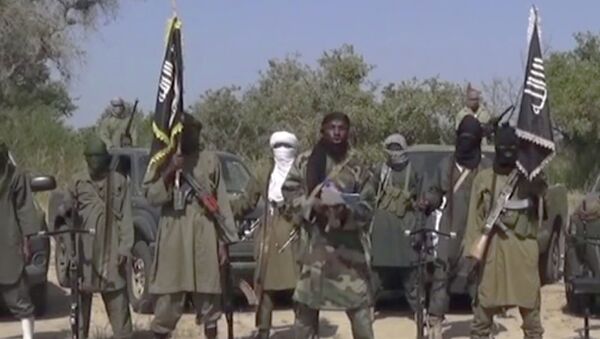 © AP Photo
Subscribe
Female suicide bombers detonated themselves early Wednesday in the town of Damaturu in northern Nigeria, killing at least 18 people in three attacks, one of which targeted a mosque.

Nigerian Troops Free Hundreds of Women, Children, Arrest Boko Haram Leader
Overnight, Boko Haram militants fired on a rural military camp in the northern Nigerian state of Yobe but were beaten back by government troops, resulting in 100 militant deaths. Army spokesman Col. Sani Usman said that the fight took the lives of seven troops and injured nine in the village of Goniri.

At dawn, as people were arriving at a mosque for morning prayers, one woman detonated herself  in Yobe's commercial center Damaturu.  A second attack followed shortly thereafter.

Musa counted 15 dead and 12 wounded, who were taken to the hospital in the town, which has been the site of dozens of attacks in the six years since Nigeria's Islamist uprising.

Assistant Superintendent Toyin Gbagedesin said seven people were killed in the Damaturu attacks, with the Associated Press reporting there was no way to reconcile the differing death tolls.

Army spokesman Colonel Sani Usman has disclosed that the army in the morning of Wednesday, October 7, repelled… http://t.co/JEsckFW9UA

According to estimates from Amnesty International, 20,000 people have died in Nigeria's islamist insurgency.