Damascus in Talks With Moscow on Third Intra-Syrian Meeting – Ambassador 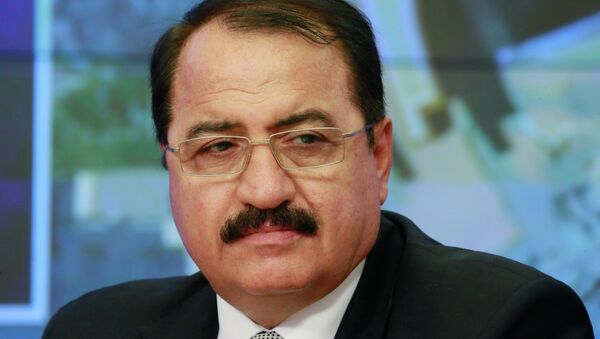 © Sputnik / Alexander Natruskin
/
Go to the photo bank
Subscribe
Damascus hopes that a new round of intra-Syrian consultations will be held in Moscow by the end of the year, and is currently in talks with Russian authorities on this issue, Syria's Ambassador to Russia Riad Haddad told Sputnik on Wednesday.

Russian Warships in Caspian Sea Launch Attack on ISIL in Syria
MOSCOW (Sputnik) – In August, all members of the United Nations Security Council supported a resolution calling for renewed peace talks on the Syrian conflict, including discussion of a political transition in the country.

"Our consultative meetings with Russian friends are carried out on a permanent basis. The Syrian government, in the face of President Bashar Assad has previously underscored the importance of Moscow-3. This has also been stated by the republic's Foreign Minister Walid Muallem. I meet every day with senior Russian Foreign Ministry officials in order to make Moscow-3 happen," Haddad said.

Syria is currently in a state of civil war, with government forces fighting on multiple fronts against the so-called "moderate" opposition and several radical Islamist groups, including the Islamic State (ISIL) militant group.

Moscow has hosted two rounds of talks between representatives of the Syrian opposition and the country's authorities so far in 2015.