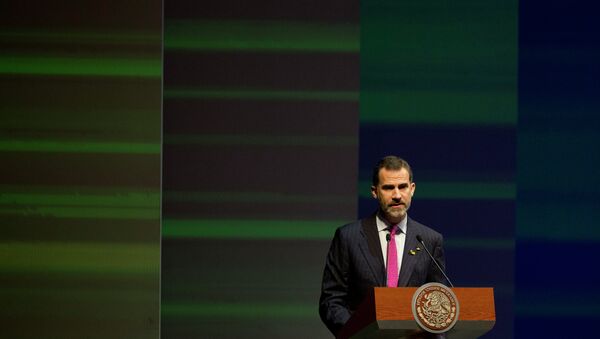 Several Spanish lawmakers walked out of the European Parliament in Strasbourg prior to a speech of King Felipe VI of Spain on Wednesday.

Spain Calls for Creation of Common Front Against ISIL
MADRID (Sputnik) – The lawmakers that left the assembly hall, belong to the United Left, the Galician Left Alternative, the Republican Left of Catalonia and the Basque nationalist EHBildu party.

"We didn't attend the plenary session of the European Parliament because Felipe is not legitimate,” Marina Albiol from the United Left told journalists.

She added that “the European Parliament should represent the European democracy and should have closed its doors to those who have not been democratically elected."

Felipe VI was proclaimed King of Spain in June after his 76-year-old father, Juan Carlos, announced his abdication.

The Spanish Royal Family has been the center of several scandals in recent months, after princess Cristina and her husband, businessman and former sportsman Inaki Urdangarin, were accused of corruption.