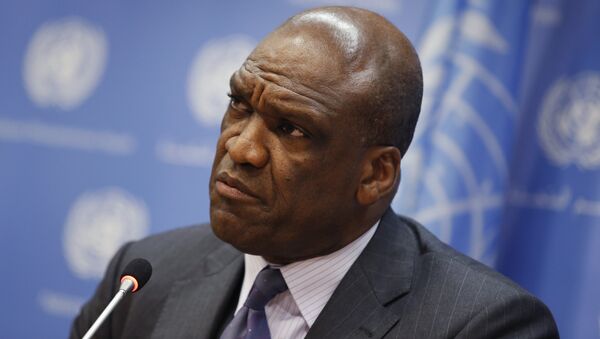 © REUTERS / Mike Segar
Subscribe
A fresh scandal involving a United Nations official is gaining momentum in the US, as a New York court has brought charges against former UN General Assembly President John Ashe for his alleged involvement in a years-long corruption scheme involving a Chinese billionaire real estate developer.

Food-for-Oil Programme: Corruption Under the Auspices of UN
Ambassador Ashe, who represented Antigua and Barbuda and who served as UNGA president from 2013 to 2014, allegedly received bribes worth millions of dollars from Chinese businessmen, spending the money on luxury cars, Rolex watches, his mortgage, and a $30,000 basketball court, among other high-ticket items.

UN chief Ban Ki-moon was “shocked and deeply troubled” to learn of the charges, according to the secretary-general’s spokesperson, who said the UN had not previously known of the investigation into Ashe and others, including jailed billionaire Macau real estate developer Ng Lap Seng.

The United Nations’ secretariat is set to cooperate with US authorities if asked.

“United in greed, defendants allegedly a formed corrupt alliance of business and government, converting the UN into a platform for profit,” said Manhattan US Attorney Preet Bharara, who announced the case.

Bharara: We will continue to do everything we can to root out public corruption–whether we find it in a city council, in Albany, or in UN

Alongside Ashe, five people are being charged for their alleged participation in the corruption scheme. Chinese developer Ng was arrested on September 19 together with his assistant, Jeff Yin. They are suspected of illegally bringing $4.5 million into the United States, Reuters reported.

From 2011-2014, bribers allgdly transferred over a million $$ in cash & wire transfers to Ashe’s bank accts

According to court documents, Ng paid Ashe more than $500,000 for telling the United Nations’ Secretary General that a UN-sponsored conference center in Macau needed to be built. 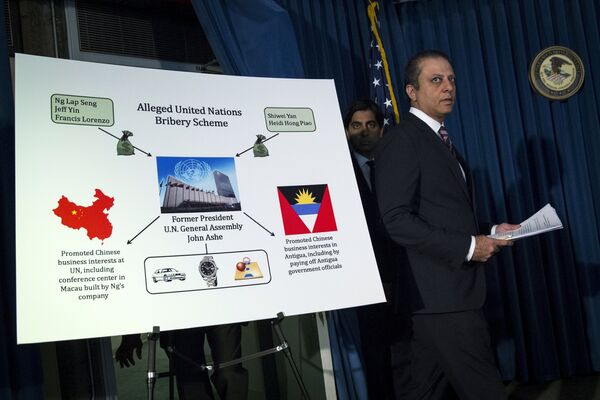 United States Attorney Bharara arrives to address a news conference to announce charges against six individuals in a wide-ranging corruption scheme at the United Nations at the U.S. Attorney's Office for the Southern District of New York in Manhattan
© REUTERS / Andrew Kelly

#UN spox: Ban Ki-moon staff "have no recollection of any discussion b/w John Ashe and the Secretary-General relating to a center in #Macao"

In addition, Ashe was allegedly paid over $800,000 for supporting the interests of other Chinese businessmen at the UN and in Ashe’s home country of Antigua and Barbuda.

Bharara: If proven, these charges will confirm that the cancer of corruption that plagues many local & state govt’s infects the UN as well

The President of the UN General Assembly is a ceremonial one-year post, paid for by the home nation.