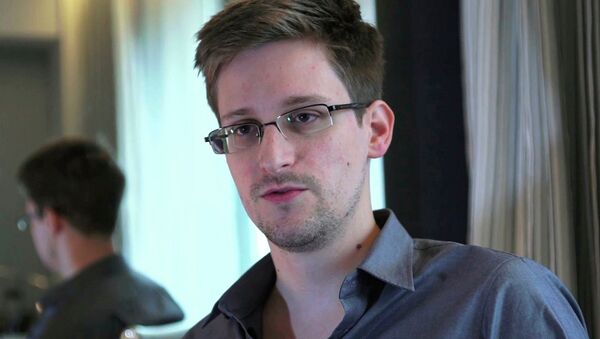 Snowden told the BBC's Panorama that GCHQ could gain access to a handset by sending it an encrypted text message and use it for such things as taking pictures and listening in.

Both the GCHQ and NSA have invested heavily in technology allowing them to hack smartphones, he added, saying the agencies "want to own your phone instead of you."

"Dreamy Smurf is the power management tool which means turning your phone on and off with you knowing," Snowden said.

"Nosey Smurf is the 'hot mic' tool. For example if it's in your pocket, [GCHQ] can turn the microphone on and listen to everything that's going on around you — even if your phone is switched off because they've got the other tools for turning it on.

"Tracker Smurf is a geo-location tool which allows [GCHQ] to follow you with a greater precision than you would get from the typical triangulation of cellphone towers."

Paronoid Smurf is a self-protection tool that's used to veil GCHQ's manipulation of your phone.

"For example," Snowden said, "if you wanted to take the phone in to get it serviced because you saw something strange going on or you suspected something was wrong, it makes it much more difficult for any technician to realize that anything's gone amiss."

Once GCHQ has gained control of the phone, Snowden said, the agency would be able to see "who you call, what you've texted, the things you've browsed, the list of your contacts, the places you've been, the wireless networks that your phone is associated with.

"And they can do much more. They can photograph you."

Snowden said the "exploit," the SMS message the agency sends to gain access to the phone, would pass unnoticed by the user.

"That's a specially crafted message that's texted to your number like any other text message but when it arrives at your phone it's hidden from you. It doesn't display. You paid for [the phone], but whoever controls the software owns the phone."

The NSA reportedly has a program similar to Smurf Suite.

The NSA and GCHQ are targeting suspected terrorist, Snowden said, "but to find out who those targets are they've got to collect mass data."

"They say, and in many cases this is true, that they're not going to read your email, for example, but they can and if they did you would never know," he said.

000000
Popular comments
This is means, we are leaving under their control, it means bye bye our on privacy,it means we leave in a open sky jail, it means that we are stupid to allow that. Snowden is the man of the century who is telling us who we are and what we own in this life. The response is nothing, we are animals. Even tough animals are better then us.
mounir.assi
6 October 2015, 02:06 GMT1
000000
Newsfeed
0
New firstOld first
loader
LIVE
Заголовок открываемого материала
Access to the chat has been blocked for violating the rules . You will be able to participate again through:∞. If you do not agree with the blocking, please use the feedback form
The discussion is closed. You can participate in the discussion within 24 hours after the publication of the article.
To participate in the discussion
log in or register
loader
Chats
Заголовок открываемого материала
Worldwide
InternationalEnglishEnglishMundoEspañolSpanish
Europe
DeutschlandDeutschGermanFranceFrançaisFrenchΕλλάδαΕλληνικάGreekItaliaItalianoItalianČeská republikaČeštinaCzechPolskaPolskiPolishСрбиjаСрпскиSerbianLatvijaLatviešuLatvianLietuvaLietuviųLithuanianMoldovaMoldoveneascăMoldavianБеларусьБеларускiBelarusian
Transcaucasia
ԱրմենիաՀայերենArmenianАҧсныАҧсышәалаAbkhazХуссар ИрыстонИронауОssetianსაქართველოქართულიGeorgianAzərbaycanАzərbaycancaAzerbaijani
Middle East
Sputnik عربيArabicArabicTürkiyeTürkçeTurkishSputnik ایرانPersianPersianSputnik افغانستانDariDari
Central Asia
ҚазақстанҚазақ тіліKazakhКыргызстанКыргызчаKyrgyzOʻzbekistonЎзбекчаUzbekТоҷикистонТоҷикӣTajik
East & Southeast Asia
Việt NamTiếng ViệtVietnamese日本日本語Japanese俄罗斯卫星通讯社中文（简体）Chinese (simplified)俄罗斯卫星通讯社中文（繁体）Chinese (traditional)
South America
BrasilPortuguêsPortuguese
NewsfeedBreaking
17:10 GMTDaesh Claims Responsibility For Attacks in Eastern Afghanistan
17:03 GMT800+ Naked Swimmers Celebrate Approach of England's Autumn Equinox
16:52 GMTUS National Whelan Tells Family About Physical Assault in Russian Prison
16:37 GMTDems Reportedly Mulling Ploy to Defuse Debt Ceiling Stand-off with GOP to Avert Gov't Shutdown
16:30 GMTHeart-Stopping Moment: Divers in Brazil Come Face-To-Face With Giant Anaconda
16:23 GMTEU Greens Co-leader Threatens to Turn Nord Stream 2 Into ‘Investment Ruin’
16:22 GMTUK's New Foreign Secretary Heads to US on First Foreign Visit
15:58 GMTHindu Man Thrashed by Thugs for Travelling With Muslim Woman in India's Bengaluru - Video
15:53 GMTRonaldo Supports Coma-Stricken Player: 'Get Well Soon My Friend'
15:29 GMTBoxer Manny Pacquiao to Run for Philippine President in 2022 Election
15:16 GMTCharanjit Singh Channi to be Next Chief of Punjab, Says India's Congress Party
15:04 GMTIran’s President Hails Entry Into China, Russia-led Economic & Security Pact as ‘Diplomatic Success’
14:59 GMTStreaming Giant Netflix Tipped to Score Big Time at Live 2021 Primetime Emmy Awards
14:20 GMTSpanish Canary Island of La Palma Rocked by Volcanic Eruption - Videos
14:12 GMTFrance Denies Cancelling Summit With Swiss President Over Jet Ordering Debacle
13:41 GMTTwo Libyan Helicopters of Haftar's LNA Collide at Drills Near Benghazi, 2 Killed,Source Says
13:40 GMT'Two Steps Forward': Pele's Daughter Shares Details on Iconic Player's Condition After Surgery
13:35 GMTSafety First! US Reportedly Frees Daesh Fighters From Prison in Syria, Jabs Them With Covid Vaccines
13:31 GMTDonald Trump's Hollywood Walk of Fame Star 'Gets Smeared in Dog Poop'
13:00 GMTNot Toys, But Collector's Items: Bavarian Business Rolls Out 'Merkel Teddy Bear'