Greek PM Calls for Fundamental Changes and End to Corruption 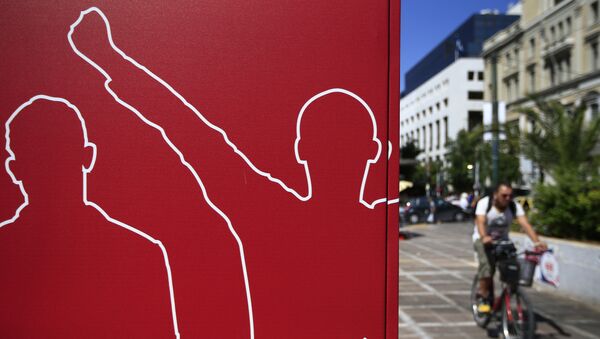 © AP Photo / Lefteris Pitarakis
Subscribe
Prime Minister Alexis Tsipras has warned that Greece has "to fundamentally change in the next four years" and fight "the establishment", corruption and tax evasion, if it is to meet its bailout terms, which the IMF has said is "unsustainable."

Tsipras will Monday unveil a painful 2016 draft budget meant to satisfy its international creditors, projecting the economy will stay in recession next year before returning to growth in 2017, in line with the estimates by the country's lenders.

A clear mandate for a four year term. #Syriza will stand tall, it won't be intimidated. This victory belongs to the working classes. #Greece

After seven months of heated negotiations with its EU/IMF creditors, Athens agreed in July to implement spending cuts and economic reforms in exchange for a US$97 billion bailout that kept it in the Eurozone under strict supervision.

The 12 Labors of Tsipras

Although government officials have expressed optimism that the recession this year will be milder than projected in the bailout program, due to an increase in tourism revenues and stronger than expected first-half data, any change in the economic forecasts will only come later.

The debt-ridden economy is officially expected to shrink by 2.3 percent this year and 1.3 percent in 2016. Public debt is seen rising to 196 percent of gross domestic product in 2015 and peak at 201 percent in 2016, including the new loans.

"The main targets of the draft budget will not differ from the estimates in the bailout," a finance ministry official told Reuters.

"Our estimate is for a shallower recession this year and that might be reflected in the final budget that will be submitted to parliament in November, after the first review of the new program."

The bailout projects a 0.25 percent primary budget deficit before debt service this year and a surplus of 0.5 percent next year. Greece is meant to achieve a primary surplus of 3.5 percent of GDP a year from 2018 under the August deal.

Diplomats and Greek officials say Tsipras and his Syriza party have decided to stop fighting the creditors for now and comply with the bailout in the quest for early debt relief and a return to economic independence.

Finance Minister Euclid Tsakalotos will meet his Eurozone counterparts in Luxembourg Monday evening to discuss a set of reforms that Athens needs to enact by mid-November to qualify for the next tranche of bailout funds.

At the same time, Tsipras will present his four-year government program to lawmakers in Athens before a confidence vote late on Wednesday. The government controls 155 MPs in the 300-seat parliament and is expected to easily pass the vote.

Tsipras was re-elected last month on a mandate to implement the bailout and find ways to ease the social pain that it will entail for the poorest Greeks.

Government officials said he will tell parliament that Greece will stick to the bailout, fight corruption and reform the state. But Tsipras will also outline what the government calls "grey areas" where it believes it can negotiate better terms or find alternative measures with the same fiscal impact.

Along with debt rescheduling, these areas include labor law, pension reforms, the liberalization of the energy market and a controversial 23 percent tax on private education.

"We want to dive deep, complete the bailout review and the bank recapitalization, and then move on to the debt talks," a government official told Reuters.