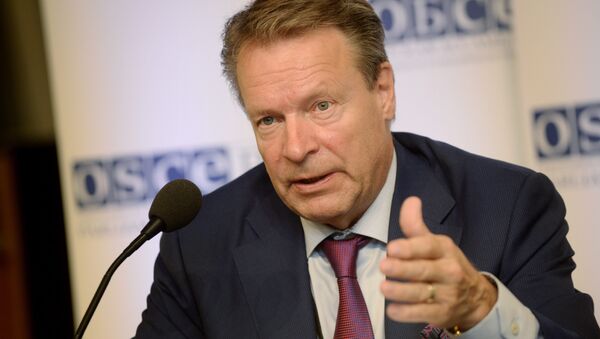 © AFP 2021 / LEHTIKUVA / Mikko Stig
Subscribe
The president of the Organization for Security and Co-operation in Europe (OSCE) Parliamentary Assembly (PA), Ilkka Kanerva, told Sputnik he might accept the invitation to visit Crimea depending on several factors, including the implementation of the Minsk agreements.

Normandy Four Meeting in Paris Gives Hope for Minsk Deal Implementation
MOSCOW (Sputnik), Svetlana Alexandrova – On Thursday, Sergei Naryshkin, the speaker of Russia's lower house of parliament, invited Kanerva to visit Crimea "to talk to people in the streets" and personally assess the situation on the peninsula.

"My decision to go to Crimea will depend on the situation as a whole and on the implementation of the [Minsk] agreements and also on further developments in Crimea. We have to wait and see what is going to happen in general," Kanerva said.

Kanerva added that he did not expect any progress on the issue within coming months, as his fall schedule would be very busy.

Crimea voted to secede from Ukraine and rejoin Russia in a March 2014 referendum, with over 96 percent of voters backing the move. Kiev and the West denounced the referendum as illegal and accused Russia of meddling in Ukraine's internal affairs.

In his earlier statements, the OSCE PA president labeled Crimean reunification with Russia as "annexation" and called the referendum "fabricated."

Moscow maintains that the vote was held in accordance with international law.