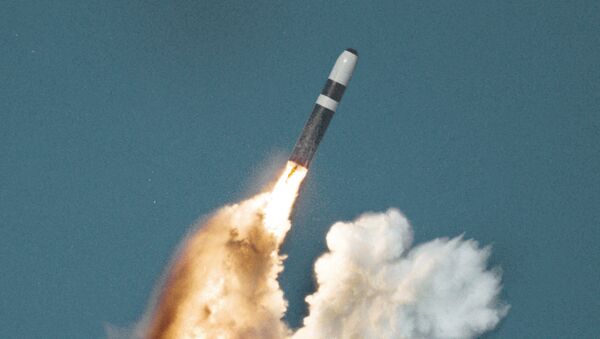 David Mackenzie, member of the Scrap Trident Coalition claims that if the Conservative UK government forces through a renewal of the country’s unpopular nuclear deterrent system, it may trigger a new Scottish independence referendum.

MOSCOW (Sputnik), Anastasia Levchenko — If the Conservative UK government forces through a renewal of the country’s unpopular nuclear deterrent system, it may trigger a new Scottish independence referendum, David Mackenzie, member of the Scrap Trident Coalition, told Sputnik on Monday.

The debate on the necessity of keeping an expensive nuclear deterrent in the UK has become particularly acute in the country. On Sunday, Prime Minister David Cameron stated that Britain’s usage of nuclear weapons may be justified in certain circumstances, replying to statements by new Labour leader Jeremy Corbyn that UK the Trident program should never be used, even under an attack.

"If in fact the government is able to push through its decision about replacing Trident, which it may do not through the vote in the parliament, but in the context of budget statements, if that goes ahead, then impact on the Scottish attitudes to the rest of the UK would be quite dramatic, and it will be one of the triggers for the second Scottish referendum," Mackenzie said.

The Scottish National Party staunchly advocates the immediate removal of the UK nuclear deterrent. The Conservatives seek a renewal of the program.

"Any imaginable military use [of Trident] would involve the slaughter of many thousands if not millions of innocent civilians. So there are no imaginable scenarios in which Trident could be used without breaching international law," David Mackenzie added.

Cameron: NATO, Trident Nukes Protecting UK From Global Danger
Trident has been designed only for the most extreme hypothetical situations, "not for anything else, not small targeted military installations at all," Mackenzie noted.

The renewal of the costly Trident program was one of the top issues in the run-up to this year’s general election that propelled the Conservative Party, led by Prime Minister David Cameron, to a second term.

Mackenzie also claims that UK citizens are increasingly opposed to the country’s possession and deployment of nuclear weapons.

"What has happened in the UK in the last week is remarkable. It started by Jeremy Corbyn saying that if he were the prime minister, he would not authorize the use of nuclear weapons under any circumstances. The effect on the public opinion has been pretty remarkable. People are waking up to the fact that these are not theoretical weapons systems hidden somewhere in Scotland, these are real weapons which can be used within 15 minutes at any time," Mackenzie said.

It is the most public UK debate on the issue of a nuclear deterrent, according to Mackenzie. In these circumstances, he suggests, it is possible that a number of Conservative parliamentarians who traditionally advocate the renewal of Tridents, could find it difficult to vote for renewal and replacement of the nuclear-weapon equipped submarines.

"There is a huge popular swell against nuclear weapons. We saw it last year in Scotland during the time of the referendum, and it’s now spreading in the rest of the UK. This will have a huge impact on the whole political situation, but in the long term," Mackenzie said.