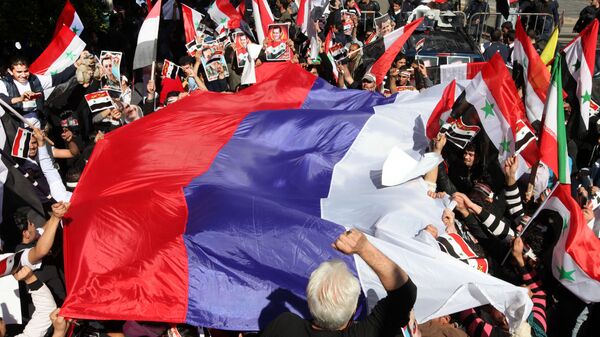 Ilya Tsukanov
All materialsWrite to the author
With the Russian air campaign in Syria against ISIL entering its sixth day, much has been written about the reasons for Russia's intervention. However, apart from its loftier goals, Moscow also has at least one 'selfish' reason for fighting Islamic radicalism abroad - namely, to prevent it from coming home to roost in Russia's own neighborhood.

Putin's Consistent Syrian Policy Driving Washington Up the Wall
Much has been said about the Russian campaign of airstrikes aimed at assisting the Syrian Arab Army in its war against ISIL, from the commitment to supporting a close Russian ally, to the strategic goal of supporting a secular Arab government in the face of extremism, to the dividends gained by joining directly in the international military effort to fight the terror group.

However, it seems that in all the commotion, the issue of Russia's self-interest in joining the war has been set aside.

Speaking to journalists immediately following the announcement that the Russian senate had approved the use of the military to support the Syrian government, Kremlin Chief of Staff Sergei Ivanov clarified that the Russian leadership had made its decision based on two criteria: assisting its ally, and protecting Russia's "national interests."

But what are Russia's national interests? In a recent article for business magazine Expert, journalist Gevorg Mirzayan challenged the claim made by some Russian commentators that Russia had foolishly taken on the onerous responsibility of fixing a colossal mess created by others. According to the analyst, "in fact the situation is much simpler. Moscow really is 'pulling chestnuts out of the fire,' but for itself," and in its own interest.

Mirzayan notes that while the Russian operation is naturally fraught with risks and dangers, "the consequences of ignoring the terrorist threat in Syria through the principle that it's 'no concern of mine' is much more dangerous." The reality, Mirzayan suggests, is that "once Assad's hut burns down, the fire will spread to Russia's house as well, either immediately, or, more likely, after some additional steps."

Mirzayan recalls that at the moment, several thousand radicals from Russia and across the former Soviet Union have joined ISIL's ranks. Last month, the Russian internal affairs ministry estimated that about 1,800 Russian citizens to have joined the terror group.

"After the fighting is over, they will go home," the expert explains. "But while they had left for [for Syria and Iraq] as ordinary radicals and marginal elements, they will return with professional training in explosives and sabotage, gaining useful contacts and channels of financing," he adds.

Middle Eastern Misadventures Have Lost the US Right to 'Police the World'
"And if the Russian Security Service is competent in catching and jailing those who return to the North Caucasus, Crimea or Tatarstan, the security services of other post-Soviet states do not have the same skills, finances, organizational capabilities and operational experience," Mirzayan warns.

"Thousands of militants will return to Azerbaijan, Kazakhstan, Kyrgyzstan, Tajikistan and Uzbekistan." According to the analyst, Tajikistan at present is particularly vulnerable, given its population's heavy dependence on falling remittances from Russia, the devaluation of the ruble, and the government's recent crackdown on the Islamic opposition. In case of conflict, if some part of the Tajik population were to fall under the influence of ISIL propaganda, it could destabilize both Tajikistan and neighboring Kyrgyzstan, which controls a part of the Ferghana Valley, which Mirzayan recalls is a hotbed of radical Islam in Central Asia.

"As a result, in the best case scenario, Russia would receive a flow of hundreds of thousands of refugees. At worst, we would get a huge zone of instability around the perimeter of Russia's southern border, which would require billions of rubles, thousands of Russian lives and decades-worth of time to stabilize. And with this task Moscow could not expect to get any special assistance from anyone, apart from China."

Subsequently Mirzayan explains, "it is much faster and more inexpensive to solve the problem now –on foreign soil and together with the forces of an international coalition."

Syrian Strikes: A Win for Russia Will be a Win for Syria and Middle East
These realities seem to be something that the Russian leadership has taken to heart in its calculation to intervene in the conflict. Speaking to his cabinet on the day the airstrikes began, President Putin emphasized that "the only true way to combat international terrorism –and those fighting in Syria and its neighboring countries are just that, international terrorists – is through preemption, and fighting and destroying insurgents in territories that are already occupied, instead of waiting for them to come to our house."

Putin's words were echoed by everyone from Chief of Staff Ivanov to Prime Minister Dmitri Medvedev. It is a sentiment which Russians, who have not forgotten the bitter legacy of Islamist terrorism and its effects both on their own country and on other countries in the former USSR, are likely to share.

According to Mirzayan, in Syria, "Russia is destroying its future enemies, with the help of Syrian, Iraqi and Iranian hands, nations for whom the problems which could face Russia tomorrow are already being faced today. They are the ones who bear the main financial and human losses of this war, their soldiers are the ones fighting on the ground and conducting real offensive operations. All they need now from Russia is technical assistance, intelligence and airstrikes. And all this Moscow has provided."