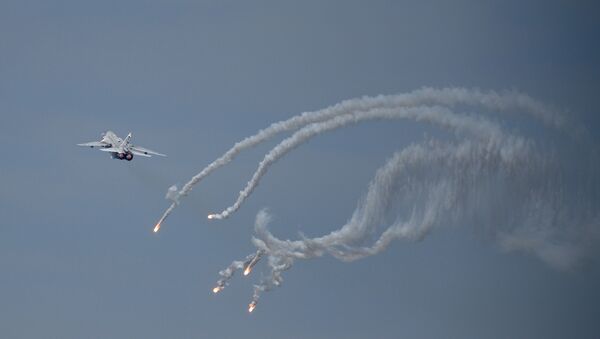 "Su-25 attackers hit the terrorist training camp in Idlib province. As a result, they destroyed the hideouts and explosive device manufacturing," the spokesman said.

Russian aerospace forces planes have conducted airstrikes on 8 facilities of the Islamic State near the city of Jisr ash-Shugur in Syria's Idlib province destroying 3 ammunition depots.

Russia's aviation conducted 20 flights and carried out 10 airstrikes against facilities of the Islamic State (ISIL) terrorist group in the past 24 hours.

"Twenty flights of Su-34, Su-24m and Su-25 were carried out in the past 24 hours. Airstrikes have been launched on 10 targets of IS armed groups," Konashenkov said.

According to the General Staff of the Russian Armed Forces, the airstrikes carried out by the Russian jets disrupted ISIL control system and its logistics and caused significant damage to the infrastructure used for planning terrorist acts on the territory of Syria and Iraq.

Russia launched airstrikes on ISIL targets in Syria following a request from Assad.

Syria has been in a state of civil war since 2011. The country’s government is fighting a number of opposition forces, as well as radical Islamist militant organizations, including the Islamic State.