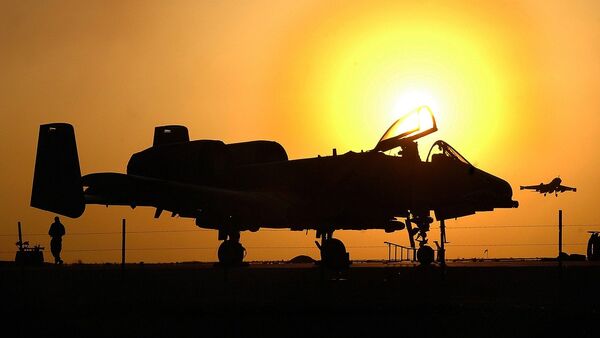 © Photo : pixabay
Subscribe
Democratic presidential candidate Bernie Sanders opposes applying a unilateral US no-fly zone in Syria, saying that it may lead to a never ending US entanglement in the region.

Sanders asked American officials to stop interfering in the Arab country because it is making the situation there worse.

“I oppose, at this point, a unilateral American no-fly zone in Syria, which could get us more deeply involved in that horrible civil war and lead to a never-ending US entanglement in the region,” Sanders said in a statement to The Washington Post on Saturday.

Mainstream Media Explains Why Mainstream Media Won’t Cover Bernie Sanders
Sanders said that US meddling in the Syrian conflict could worsen the crisis, resulting in more deaths of civilians.

“We must be very careful about not making a complex and dangerous situation in Syria even worse,” he said.

Sanders’ announcement has put him in line with President Barack Obama. But Hillary Clinton, his main rival for the Democratic presidential nomination has expressed opposite views.

In a television interview on Thursday, Clinton, who served as Obama’s secretary of state, publicly broke with the Obama administration and promoted additional air power to protect civilians.

“I personally would be advocating now for a no-fly zone and humanitarian corridors to try to stop the carnage on the ground and from the air,” Clinton said.

Syria has been engrossed in war since March 2011. The United States and its regional allies — especially Qatar, Saudi Arabia and Turkey — have been supporting the militants operating inside Syria since the beginning of the crisis.

According to American journalist Don DeBar, “They [American officials] have termed their invasion, a rebellion, a civil war,” he stated.

“These are the people from other countries that are on tour, they were in Libya, they have been elsewhere in North Africa and the Middle East, and they will be going somewhere else once they are finished in Syria too,” he stated.

He noted that Russia on the other hand is acting in coordination with the Syrian government to defend Syria from a US-led invasion.

000000
Popular comments
Applying a unilateral u.s no-fly zone in Syria? And who the bloody bananas does the u.s thinks it is anyway? We all know very well what happend in Lybia when these terrorist put a no-fly zone there!!! Now if Syria would setup a no-fly zone that would be a great move so Russia can test their latest defence system on the u.s and their 60 allys terrorist planes!!!

Terra
4 October 2015, 23:45 GMT3
000000
Russia has already put its no-fly zone into effect, fortruss.blogspot.it/2015/10/russia-does-not-discriminate-between.html Sanders has proven himself to be little different from his political kin by supporting the Outlaw Empire. Chavez and Maduro were/are Dictators. His line on Assad's no different from Obama's: Bloody dictator who kills his own people. Indeed, he's very undifferent from Neocon Clinton when it comes to destroying nations and other peoples--a diametrical opposite of his domestic pronouncements. In reality, Sanders is a coward on the Big Issues, and is incapable of standing up to the Deep State running the Empire. Sanders's Hope and Change is no different from Obama's.
karlof1
4 October 2015, 19:18 GMT2
000000
Newsfeed
0
New firstOld first
loader
LIVE
Заголовок открываемого материала
Access to the chat has been blocked for violating the rules . You will be able to participate again through:∞. If you do not agree with the blocking, please use the feedback form
The discussion is closed. You can participate in the discussion within 24 hours after the publication of the article.
To participate in the discussion
log in or register
loader
Chats
Заголовок открываемого материала
Worldwide
InternationalEnglishEnglishMundoEspañolSpanish
Europe
DeutschlandDeutschGermanFranceFrançaisFrenchΕλλάδαΕλληνικάGreekItaliaItalianoItalianČeská republikaČeštinaCzechPolskaPolskiPolishСрбиjаСрпскиSerbianLatvijaLatviešuLatvianLietuvaLietuviųLithuanianMoldovaMoldoveneascăMoldavianБеларусьБеларускiBelarusian
Transcaucasia
ԱրմենիաՀայերենArmenianАҧсныАҧсышәалаAbkhazХуссар ИрыстонИронауОssetianსაქართველოქართულიGeorgianAzərbaycanАzərbaycancaAzerbaijani
Middle East
Sputnik عربيArabicArabicTürkiyeTürkçeTurkishSputnik ایرانPersianPersianSputnik افغانستانDariDari
Central Asia
ҚазақстанҚазақ тіліKazakhКыргызстанКыргызчаKyrgyzOʻzbekistonЎзбекчаUzbekТоҷикистонТоҷикӣTajik
East & Southeast Asia
Việt NamTiếng ViệtVietnamese日本日本語Japanese俄罗斯卫星通讯社中文（简体）Chinese (simplified)俄罗斯卫星通讯社中文（繁体）Chinese (traditional)
South America
BrasilPortuguêsPortuguese
NewsfeedBreaking
11:15 GMTMassive Plume of Smoke Reportedly Spotted Rising From Major US Base in Iraq - Video
11:13 GMTFrance Hardens Visa Rules for Moroccans, Algerians, Tunisians
11:05 GMTMan Who Threw Egg at Macron Admitted to Psychiatric Hospital
10:44 GMTGeorgina Rodriguez Desperate to Be Cristiano Ronaldo's Wife, Waiting for Man Utd Star to Propose
10:27 GMTTrump Facing Possible Criminal Liability For ‘Sustained Assault’ on Georgia’s Electoral Vote Count
10:25 GMTMilley Preps for Congressional Grilling Over ‘Treasonous’ Phone Call to PLA Head Behind Trump’s Back
10:17 GMTMoscow Calls on NATO, EU to Urge Pristina to Withdraw Forces From Kosovo and Prevent Escalation
10:15 GMTEuropean Parliament President Says German Elections Testify to Stability of Europe
10:12 GMTKremlin Sees No Reason for Ukraine to Be Hysterical About Russian-Hungarian Gas Contract
10:01 GMTCampaign Ads Offering 'Russian Virgins & Cocaine' on a Menu Outrages Embassy in Spain
10:00 GMTUK's Labour Party Blames Government for Fuel Crisis
09:08 GMTFrench Sanofi Gives Up mRNA COVID-19 Vaccine Development Over Saturated Market
08:42 GMTUK to Start First Round of Talks on Joining Trans-Pacific Trade Bloc
08:40 GMTTwitter Frenzy as UEFA Scraps Decision to Fine European Clubs for Launching Super League
08:36 GMTHaiti Dismisses Highly-Criticized Electoral Council, Prime Minister’s Office Says
08:34 GMTBeijing on Exclusion From Dukovany NPP Project: We Hope Prague Will Respect Market Rules
08:30 GMTDemi Lovato Opens Up About 'Warm and Loving' UFO Interaction
08:27 GMTBudapest Summons Kiev's Ambassador to Discuss Reaction to Gas Deal With Russia, Reports Say
07:58 GMTYouTube Removes Content 'Casting Doubt Over Elections in US, Germany'
07:56 GMTPolice Chief in Utah Takes Leave of Absence Amid Gabby Petito 911 Call Handling Probe