© Sputnik / Igor Zarembo
/
Go to the photo bank
Subscribe
Ekaterina Blinova
All materialsWrite to the author
Russia's Air Force operation against ISIL in Syria has triggered a heated debate among experts and journalists. A win for Russia will be a win for Syria and the region, Germany-based political analyst Phil Butler told Sputnik, adding that it will also mean that US hegemony will have been halted.

Russia's decision to send its Air Force to Syria in response to an official request from the Syrian legitimate democratically-elected government has prompted some Western experts to suggest that the Syrian operation may turn into the "second Afghanistan" for Russia.

As Russia Pounds Terrorists in Syria, Western Media Pours Lies on Moscow
The fuss in the US media has indicated clearly that by bombing terrorists in Syria, Russia has hit a raw nerve in Washington. Indeed, after a year from the start of the US-led anti-ISIL military campaign the notorious Islamic State has not only been destroyed but even gained more territory.

The US-led coalition's airstrikes against terrorists have proven ineffective, particularly because of Washington's unwillingness to cooperate with Syrian government forces on the ground.

So what steps will Washington undertake in order to boost its shrinking influence in the Middle East? It seems unbelievable that the US will just watch how Russia and Iran gain ground in the region eliminating terrorists.

"I believe the Obama administration will continue to criticize Mr. Putin and Russia, via the State Department and controlled media. Then, as has been the case for decades, the administration will do everything in its power to turn Syria into the quagmire Mr. Obama warned Mr. Putin about. This is the course they will choose, even if it means a losing proposition for all concerned. Washington, as I've said before, is "all in" on the Arab Spring end game," Germany-based American political analyst Phil Butler told Sputnik.

Indeed, Washington war hawks are up in arms about Russia's involvement in Syria’s affairs. In his recent article for New Eastern Outlook Butler referred to an article written by Council on Foreign Relations' fellow Steven A. Cook, entitled "Syria: Let Putin Bleed."

"The organization is symbolic of the kind of elitist attitudes and thinking that has set our world on end for a century or more. If world peace and prosperity were ever a desirable end, these organizations and the people governing them are utter and irrevocable failures. From a practical standpoint, "Putin Bleeding" is code for business as usual – continual conflict and unwinnable wars," Butler underscored commenting on Cook's controversial piece.

Interestingly enough, back in the 1980s, the United States and its then president Ronald Reagan were also displeased with the USSR’s decision to provide military assistance to the legitimate Afghani government fighting against Islamist Mujahideens. 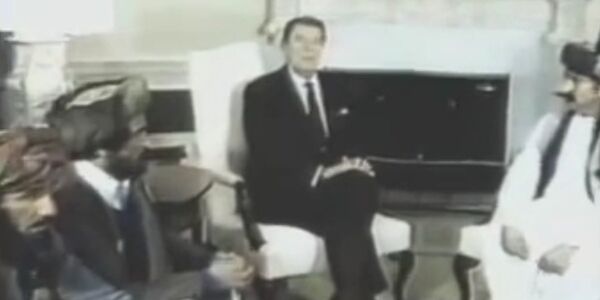 The Reagan government even went so far as to provide Islamist insurgents (branded as "freedom fighters" by Washington) with American Stinger surface-to-air missiles (SAM) in 1986. It is believed that the move contributed to the Soviet withdrawal. Later, however, the US had reaped the whirlwind it sowed providing extremists with the missile launchers, when it faced off against former "freedom fighters" during Washington's longstanding campaign in Afghanistan.

Is it possible that the White House will again supply sophisticated anti-aircraft weapons to its proxies, also known as "moderate rebels" in Syria?

"Of course this will be the strategy. As was the case in Afghanistan, the United States policy makers wanted to lure the USSR into a zero sum game. The same advisers, men like notorious Russophobe Zbigniew Brzezinski, they still control much of America's policy thinking. Brzezinski, if you will remember, was the architect of the USSR-Afghanistan debacle we speak of. So, nothing in the play book has changed. The only difference now, is that the American public and the world at large are sick and tired of these games. And another thing, Russia's leadership today is much stronger than in the 1980s. Also, Syria is not Afghanistan, and the American people are not afraid of the USSR, but the terror ISIL is helping to spread," the analyst underscored.

"The American policy makers cannot turn the world around on a dime. We've been funding the terrorists, and Mr. Putin has decided to eliminate them. Apparently, he has decided to broadcast this via YouTube as well," Butler added.

But is there the risk that Moscow's Syria campaign could turn into another Afghanistan? Can we draw parallels between the USSR of the 1980s and today's Russia?

"The Soviet Union had no choice but to leave Afghanistan. Given the political climate inside the USSR at the time, and external pressures applied by the United States and her allies, the USSR was bogged down in a catastrophe. That said, the mistake was taking the bait in the first place. As I mentioned, US strategic advisers such as Zbigniew Brzezinski cooked up the plan to serve the USSR "their own little Vietnam" — and it worked," the analyst elaborated.

"Syria is not the same situation though. This time Russia has the capability and the situation, to prove terror can be defeated with resolve," he stressed.

Although it is difficult to make predictions, there are a number of possible scenarios, according to Butler.

Game Over: ISIL Short on Cash, Russian Planes Back Them Into Corner
"As for outcomes, it all boils down to the same potentials as always. Either Russia will prevail in destroying ISIL, with or without US and alliance help, or she will not. The implications for Syria, Iraq, the region, and the world are clear as well," he noted.

"If the US prevails in this endeavor, if Russia is pulled into another endless quagmire, then ongoing conflict in this region is a certainty. No leadership, installed by the American strategists of the last 40 years, has survived intact. This is an undeniable fact. If Assad is unseated, the Obama replacement will be much worse for Syria and the Middle East. I think this is the end game for the Washington think tank dinosaurs," the geopolitical analyst emphasized.

According to Butler the alternative of a US-led solution is unthinkable for anyone desiring to end this perpetual war in the region.

On the other hand if Vladimir Putin's moves win out, "Russia will have shown the world the US and her allies had not the resolve to defeat terror in the first place," the analyst explained.

"In this scenario, a win for Russia is a win for Syria and the region, because some peaceful solution can be obtained once stability is restored. Plus, US hegemony will have been halted, which will be a good thing for the American people and the world," Butler stressed.

000000
Popular comments
Syrian Strikes: A Win for Russia Will be a Win for Syria and Middle East Agreed!

Terra
3 October 2015, 21:12 GMT1
000000
I think it's the other way around. A win for Syria will be a win for Russia. This is not like Afghanistan in the 1980s. The Afghan government was shaky. (That's one reason Alexander couldn't conquer the place.) Brezhnev was on his last legs. The USSR blundered its way in. It's not so now.
db.hungerford
5 October 2015, 16:56 GMT
000000
Newsfeed
0
New firstOld first
loader
LIVE
Заголовок открываемого материала
Access to the chat has been blocked for violating the rules . You will be able to participate again through:∞. If you do not agree with the blocking, please use the feedback form
The discussion is closed. You can participate in the discussion within 24 hours after the publication of the article.
To participate in the discussion
log in or register
loader
Chats
Заголовок открываемого материала
Worldwide
InternationalEnglishEnglishMundoEspañolSpanish
Europe
DeutschlandDeutschGermanFranceFrançaisFrenchΕλλάδαΕλληνικάGreekItaliaItalianoItalianČeská republikaČeštinaCzechPolskaPolskiPolishСрбиjаСрпскиSerbianLatvijaLatviešuLatvianLietuvaLietuviųLithuanianMoldovaMoldoveneascăMoldavianБеларусьБеларускiBelarusian
Transcaucasia
ԱրմենիաՀայերենArmenianАҧсныАҧсышәалаAbkhazХуссар ИрыстонИронауОssetianსაქართველოქართულიGeorgianAzərbaycanАzərbaycancaAzerbaijani
Middle East
Sputnik عربيArabicArabicTürkiyeTürkçeTurkishSputnik ایرانPersianPersianSputnik افغانستانDariDari
Central Asia
ҚазақстанҚазақ тіліKazakhКыргызстанКыргызчаKyrgyzOʻzbekistonЎзбекчаUzbekТоҷикистонТоҷикӣTajik
East & Southeast Asia
Việt NamTiếng ViệtVietnamese日本日本語Japanese俄罗斯卫星通讯社中文（简体）Chinese (simplified)俄罗斯卫星通讯社中文（繁体）Chinese (traditional)
South America
BrasilPortuguêsPortuguese
NewsfeedBreaking
00:38 GMTAmtrak Cross-Country Train Derails in Montana, One Passenger Reportedly Dead
00:00 GMTGerman Voters Going to Polls in Election That Marks End of Merkel's 16 Years as Chancellor
YesterdayVenezuelan Government Delegation Arrives in Mexico For Talks With Opposition - Maduro
YesterdayLavrov Says Borrell Told Russia to Get Out of Africa
YesterdayFour Teens Charged With Plotting School Attack on 25th Anniversary of Columbine Shooting
YesterdayMagnitude 5.0 Earthquake Rocks Taiwan - EMSC
YesterdayGermany Election: Merkel Warns Country's ‘Future’ at Stake Over Possible Left Swing
YesterdayAnthony Joshua Suffers Shock Loss to Oleksandr Usyk as Big Time Boxing Returns to UK After Pandemic
Yesterday'Things Happen': Trump Says 'Bad Call' From Doctor Would Possibly Prevent 2024 Election Run
YesterdayNorth Korea Ready for Talks With South on Ending 71-Year State of War
YesterdayTexas Democrat Not Ridin' With Biden on 'Trump'-Style Deportations to Haiti
YesterdayFrench Capital Sees 11th Weekend of Protests Against COVID-19 Passes
YesterdayLancet Task Force Probing COVID Origins Disbanded 'in Favour of Wider Biosafety Research'
YesterdayKamala Harris Hires Jen Psaki’s Brother-in-Law as Her Ratings Hit Bottom Amid Border Crisis
YesterdayShake a Leg! Unlucky Bank Robber in Spain Loses Prosthetic Limb During Fight With Customers
YesterdayWestern Attempts to Prop Up Order Based on Its Rules Threatens to Revive Bloc-Mentality, Lavrov Says
YesterdaySaudi-Led Coalition Intercepts Houthi-Launched Ballistic Rocket, State TV Reports
Yesterday'Absolute Catastrophe': Senator Cruz Grills Biden Over Haiti Migrant Surge
YesterdayIran, Venezuela Reportedly Reach Deal to Swap Oil for Condensate in Circumvention of US Sanctions
YesterdayLabour Leaders Drop Party Rule Changes After ‘Car Crash’ Meeting With Trade Unions