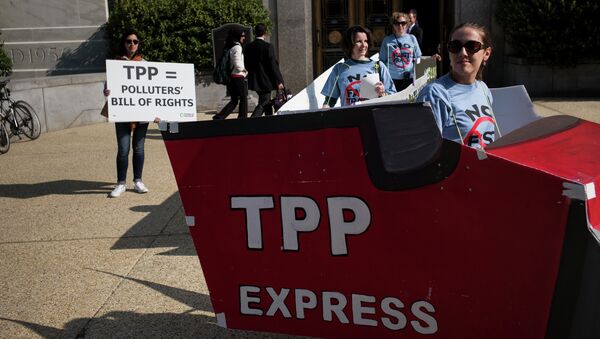 The Trans Pacific Partnership (TPP) trade pact’s proposed UN tribunals to arbitrate business conflicts will not be accountable to the people of the United States and other countries, the Atlanta #StopTPP Coalition told Sputnik.

WASHINGTON (Sputnik) — The TPP international tribunals under the United Nations Secretary-General will govern international business deals exempting companies from US and other national laws, according to the Coalition.

"The arbitrators are unelected, and completely unaccountable to the people," the Coalition said on Friday. "These tribunals are extrajudicial. Their authority is above national justice systems."

On Thursday, the Coalition held a rally in Atlanta at Woodruff Park International Peace Foundation to protest the TPP trade negotiations.

"[D]rafts of this deal have been leaked and make it obvious why this is being pushed through in such a covert way," the Coalition pointed out. "This is about power… that is being covertly shifted farther and farther away from the people."

The TPP is being negotiated in unusual secrecy between the United States and 11 Asian and Pacific Rim nations, including Australia, Japan, New Zealand, Mexico, Taiwan, South Korea and Malaysia.

The controversial trade pact is expected to cover about 40 percent of the global economy. Uncertain implications for workers' rights, employment and the environment have drawn heavy criticism from labor unions and watchdogs.