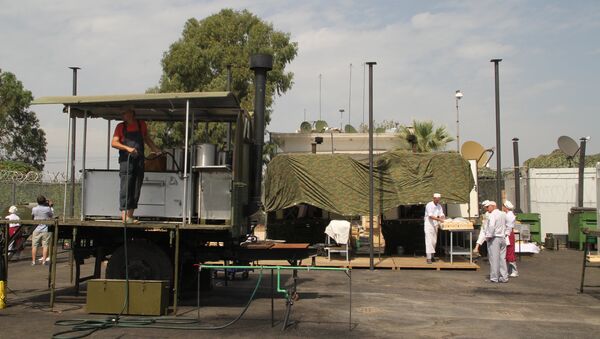 © Sputnik / Dmitry Vinogradov
Subscribe
The international proxy struggle that haunts the Syrian conflict will make it challenging for Russia and Saudi Arabia to work together on solving the crisis, especially as Moscow strengthens relations with Tehran, experts told Sputnik.

The Russian Defense Ministry said that during the first two days of the operation the country’s aircraft hit over ten targets, among them an explosives factory, an arms depot and an Islamic State coordination center.

"It would be much harder for Saudi Arabia [to cooperate with Russia], which is backing groups that Russia is striking right now, and is involved in a wider proxy war with Iran across the Middle East," Woodrow Wilson Center scholar Michael Kofman told Sputnik on Friday.

Moscow denied the allegations it is hitting the wrong targets, adding that the Turkish statement was prepared and released before Russia even began its military operation in Syria.

"Not everyone has a common enemy in Syria," Kofman noted. "It is far more convoluted than just the Islamic State."

Russia, Kofman argued, defines the Islamic State with a broad brush that is closer to the Syrian government's position that "everyone opposed to [Syrian President Bashar] Assad is a terrorist."

The Iranian-Saudi proxy war "is a more complex game and I suspect the Saudi-Russian position is too difficult to bridge," Kofman added.

Geopolitical analyst and StopImperialism.org editor Eric Draitser told Sputnik that cooperation between Russia and Saudi Arabia on Syria is unlikely for many reasons.

A major reason is the growing closeness of Russia to Iran, "both with respect to Syria, and the transfer of military technology such as the S-300s," Draitser explained.

"Also, it should be noted that Saudi Arabia is one of the principal financiers of the Wahhabi terror networks that spawned and support the Islamic State… as well as the terror groups in Chechnya and the Caucasus," he added.

Russia knows this about Saudi Arabia, Draitser pointed out, which is why Moscow is undoubtedly sending the Saudis a message with their airstrikes in Syria.