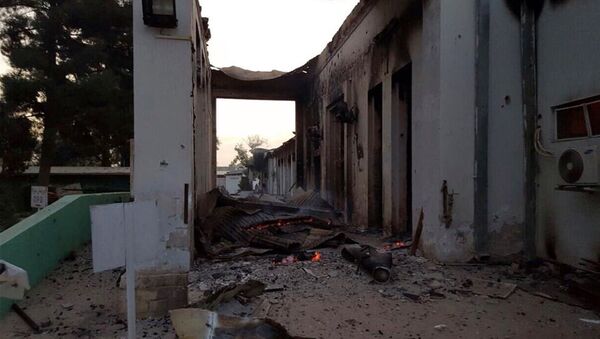 The International Committee of the Red Cross is not going to terminate its humanitarian activities in Afghanistan, following the deadly bombing of a Doctors Without Borders hospital in the Afghan city of Kunduz, ICRC's press office said.

MOSCOW (Sputnik) — On Saturday morning, the hospital accommodating some 200 people was bombed leaving at least 19 dead, 37 injured and dozens missing.

"For the moment we are not going to suspend our activities in Afghanistan. But we are going to review the security situation in Kunduz," a press office representative told RIA Novosti.

Death Toll From MSF Hospital Bombing in Afghanistan Rises to 16
NATO said in a statement that US forces conducted an airstrike in Kunduz at around the same time — just after 02:00 a.m. local time on Saturday.

Washington and Kabul have launched a joint investigation into the incident.

Afghanistan continues to be in a state of political and social turmoil, with the Taliban movement redoubling their insurgency across the country.

The Taliban military movement launched a large-scale offensive in April, despite continuous attempts by the Afghan government to resume peace talks. In May, the militants surrounded the city of Kunduz.