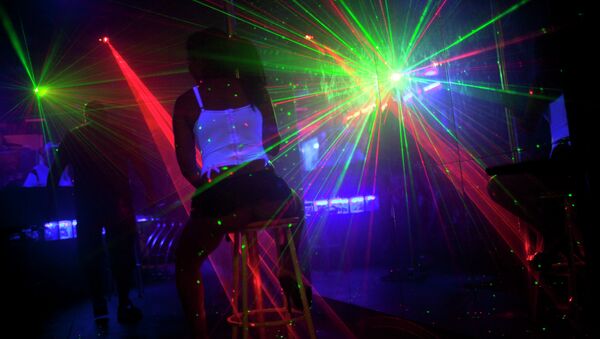 © AP Photo / Felipe Dana
Subscribe
The European Court of Justice has ruled that Dutch brothel owners must now be able to communicate with sex workers in their own languages so that the workers can be protected from abuse.

"The court considers it is possible to require that a brothel owner be able to communicate in the same language with the prostitutes who work there," the ECJ said in a statement on Thursday.

The court maintains that this is the only way to be sure that brothels are organized to protect their workers from criminal offenses against them as well as deter pimping, child prostitution, and sex trafficking.

The case involved a man named J. Harmsen, a brothel owner who wanted to operate two more window businesses in the Red Light District, but was blocked by the Amsterdam mayor in 2011.

“Mr Harmsen rented rooms out in shifts to prostitutes of Hungarian and Bulgarian origin who, during the immigration admission procedure, could not communicate in a language which Mr Harmsen could understand,” the court wrote.

Authorities are attempting to tackle the problems of human trafficking and abuse, and all brothels must be licensed, including the famous shop windows of Amsterdam.  Sex workers are also required to register at the chamber of commerce and pay taxes on their income.

Not all sex workers are happy about the ruling however, a sex worker and blogger from Amsterdam who goes by the name “Felicia Anna” told the BBC that the new laws may stop women who cannot speak Dutch or English from renting legal window spaces that are widely seen as safer than street prostitution, which is illegal.

The court maintains that they made the right decision, explaining that a brothel owner who cannot speak the language of the sex worker would be unable to ask them if they were trafficked or forced into sex work.

Amnesty International Deserted by Almost 2,000 Swedes Over Prostitution Row
It is estimated that three-quarters of the women working in the Amsterdam sex industry are foreign and arriving from Eastern Europe, Africa, or Asia, BBC reported.

Harmsen maintains that he can use interpreters or online translation software, and has stated that the court is being discriminatory.

He also argued that requiring him to determine a “prostitute’s background and motivations” during a private conversation prior to them working for him was too much of a burden, the NL Times reported.

The ECJ argued that there is no undue burden placed on brothel owners as there is no requirement of a specific language or fluency level, just “merely that the parties can understand each other.”

000000
Popular comments
Holland is a stupid country, up there with Sweeden for stupidity.