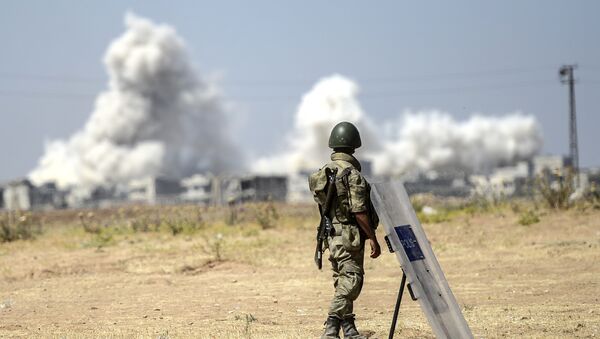 © AFP 2023 / BULENT KILIC
Subscribe
International
India
Africa
Russia is undoubtedly bombing insurgents supported by the US, but that is only because Washington has intentionally supported Al Qaeda and ISIL in Syria, geopolitical researcher Tony Cartalucci remarks.

West Demonizes Russian Airstrikes in Syria to Justify Its Own Failure
Along with some other Western reporters Australian journalist Lauren Williams notes in her recent piece that Russia has launched its airstrikes on Homs and Hama regions which are "not ISIS [ISIL] hotspots."

"The areas around Homs and Hama are not ISIS [ISIL] hotspots. In fact they are known as a bastion for the US-backed moderate rebel forces and an important strategic gateway to Assad's Alawite coastal heartland," the journalist wrote, citing US Secretary of Defense Ashton Carter, in her article for The Interpreter.

But who are these "moderate rebel forces" and where do they come from?

"In reality, from the beginning, there were never any moderates. Starting as early as 2007, years before the war in Syria began, the US as a matter of policy had long since decided to intentionally fund and support the Syrian Muslim Brotherhood — for all intents and purposes the political wing of al-Qaeda — and begin arming militants affiliated with al-Qaeda itself," Bangkok-based geopolitical researcher Tony Cartalucci elaborates in his article for New Eastern Outlook.

How do you tell a rebel from an #ISIS terrorist?#Syria #Russia

Stop Deluding Yourself, 'Assad Must Go' Will Remain Unchanged US Policy
Citing Pulitzer Prize-winning journalist Seymour Hersh's 2007 article "The Redirection Is the Administration's New Policy Benefitting our Enemies in the War on Terrorism?," the researcher pointed out that back in the early 2000s the Bush administration decided to "reconfigure its priorities in the Middle East."

Since that time Washington has sided with the Sunnis, cooperating with Saudi Arabia's leadership, against Shiites, backed by Iran. To undermine Iran-Syrian positions in the region the US took part in a series of clandestine operations aimed against Tehran and Damascus.

According to Hersh, "a by-product of these activities has been the bolstering of Sunni extremist groups that espouse a militant vision of Islam and are hostile to America and sympathetic to al-Qaeda."

Cartalucci stressed that Hersh's prophetic report exposed that even in that period of time "the extremist Syrian Muslim Brotherhood was already receiving funding and support from the United States via Saudi Arabia."

In the 2000s, the Syrian National Salvation Front — the coalition of Syrian opposition groups and the Brotherhood — and one of its leaders Abdul Halim Khaddam, a former Syrian Vice-President who defected in 2005, were receiving financial and political aid from the United States, Hersh wrote citing former high-ranking CIA and White House officials.

"By 2011, al-Qaeda's affiliates in Syria, most notably the al-Nusra Front, began operating nation-wide, taking the lead in the US-backed fight against Damascus. By 2012, when the US State Department listed al-Nusra as a foreign terrorist organization, it was clear even then, that the largest contingent of anti-government forces on the battlefield was al-Qaeda," Cartalucci pointed out.

US Can’t Find 9 CIA Trained Rebels in Syria, but McCain Claims Russia Did
In much the same vein US author and syndicated columnist Stephen Lendman writes, referring to retired US Army General Wesley Clark's book "Winning Modern Wars." In 1991, Clark, then brigadier general, met with then Under Secretary of Defense Paul Wolfowitz.

Wolfowitz's goal was to "clean out those old Soviet client regimes," he noted, adding that the list of the US' targets included Iraq, Syria, Lebanon, Libya, Somalia, Sudan, and Iran.

Cartalucci underscored that while Washington has repeatedly tried to convince the public that the anti-Assad revolt has been kicked off by the "moderate" opposition, facts on the ground have proven otherwise. Since 2011 the civil war has been largely led by al-Qaeda and its affiliates, namely al-Nusra Front.

"Since November 2011, al-Nusra Front has claimed nearly 600 attacks — ranging from more than 40 suicide attacks to small arms and improvised explosive device operations — in major city centers including Damascus, Aleppo, Hamah, Dara, Homs, Idlib, and Dayr al-Zawr. During these attacks numerous innocent Syrians have been killed," a US State Department official statement said, cited by the researcher.

Furthermore, many of those so-called "opposition" fighters were not even Syrians.

"At the start of the war against Syria [2011], Qatar printed and distributed false Syrian passports to jihadists from al-Qaeda so that they could convince Atlantist journalists that they were "rebels," and not foreign mercenaries," French intellectual and journalist Thierry Meyssan noted in his September article for Voltairenet.org, adding that "false Syrian passports are today distributed by certain smugglers to non-Syrian migrants."

US Using 'Controlled Chaos' Strategy for Social Engineering in Europe
Embarrassingly enough, in order to explain how "America's fictional 'moderate' army" has been displaced by the Islamic State and al-Qaeda Western media have repeatedly reported about "massive defections." Alas, so-called Syrian "moderate rebels" trained by US military instructors defected to Islamists with US sophisticated weapons.

However, documented evidence clearly indicates that Washington had no intention to create a genuine moderate opposition in the first place, Cartalucci emphasized:

"News of 'defections' are simply cover for the direct funding and arming of al-Qaeda and ISIS [ISIL] in Syria," he stressed.

Therefore "Russia is not arbitrarily bombing 'moderates' backed by the US in Syria to stave off allegedly 'legitimate' opposition to the government in Damascus — Russia is bombing terrorists who are either operating under the banner of al-Qaeda but are portrayed as otherwise by the US, or will inevitably end up turning their fighters and weapons over to al-Qaeda. Russia is bombing al-Qaeda," Cartalucci pointed out.

Yes, Russia is bombing militants backed by Washington, but that is only because the US is supporting Islamists in Syria.

While US Secretary of Defense Ashton Carter claims that the Russian policy in Syria is "doomed," it is more likely that it is Washington who has become seriously entangled in Middle Eastern wars.

"Claiming to fight ISIS [ISIL], while so transparently supporting them, is indeed a doomed position, one doomed to fail today, and one doomed to eternal condemnation in the future," Cartalucci concluded.