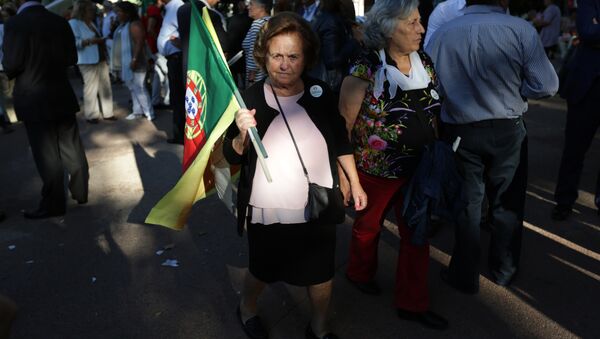 The "dead heat" in polling ahead of the upcoming legislative elections in Portugal has set the stage for a showdown between the two leading contenders, experts told Sputnik.

"No party or list will obtain an absolute majority of seats. As for the winner, polls show a dead heat at the moment," Magalhaes said.

Manuel cited recent polling, which had the PS slightly ahead of the PaF, a coalition between the Social Democratic Party (PSD) and the Democratic and Social Center – People’s Party (CDS-PP).

"However, the electorate remains split and the outcome remains in doubt," he observed.

Portugal Should Consider Leaving Eurozone – Communist Party
The Portuguese analyst added that the anti-austerity and anti-EU Workers’ Communist Party and the Left Bloc, which currently has eight seats in parliament, might manage to gain a combined 16 percent of the vote.

Manuel argued that the PS, on course to a slim victory, may attempt to form a center-left coalition, but declined to forecast major changes in the country’s overall direction of development.

With 132 seats, the PaF coalition is currently the largest faction in Portugal’s 230-seat Assembly of the Republic, followed by the PS with 74, the Democratic Unity Coalition's 16 and the Left Bloc with eight seats.