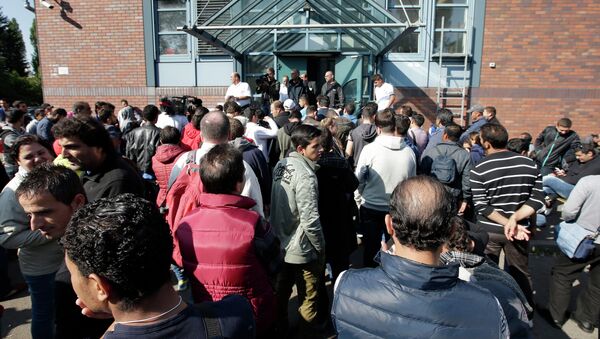 Slightly over a half of all Germans now say that they are afraid of the rising migrant influx in their country, a new survey by the national ARD broadcaster has found.

EU Must Work on Local Refugee Integration to Tackle Crisis - PACE President
MOSCOW (Sputnik) — The surging stream of refugees crossing in their thousands into Germany every day scares 51 percent of German respondents, the poll released on Thursday has shown, up from 38 percent in September.

The number of people unfazed by the migrant situation in the country has dropped from 59 percent to 47 over the past month.

The same survey has shown that Chancellor Angela Merkel’s open-door immigration policy has eroded her approval rating to a four-year low.

Safe From Harm? German Refugee Centers Rocked by Religious Clashes
Speaking at the UN on Thursday, German Foreign Minister Frank-Walter Steinmeier said his country had accepted some 600,000 refugees since the start of the year, with 10,000 asylum seekers arriving every day. He stressed that Germany, the European Union’s biggest economy, could not cope with the task of supporting all the refugees on its own and called on other European nations to share the burden.
Newsfeed
0
Access to the chat has been blocked for violating the rules . You will be able to participate again through:∞. If you do not agree with the blocking, please use the feedback form
The discussion is closed. You can participate in the discussion within 24 hours after the publication of the article.
To participate in the discussion
log in or register
loader
Chats
Заголовок открываемого материала