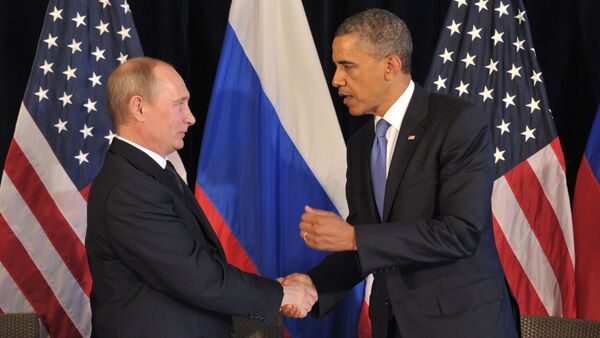 WASHINGTON (Sputnik) — The United States does not have any intentions to let the Syrian conflict become a proxy war with Russia, US President Barack Obama said during a press conference on Friday.

"We are not going to make Syria into a proxy war between the United States and Russia, that would be bad strategy on our part."

The US President stressed that the battle in Syria was "between Russia, Iran and [President Bashar] Assad against the overwhelming majority of the Syrian people."

According to Obama, Washington could not impose a military solution in Syria, and its strategic interest is in supporting the moderate Syrian opposition.

"I made very clear early on that the United States could not impose a military solution on Syria either, but that it was in our interest to make sure that we were engaged with moderate opposition inside of Syria because eventually Syria will fall."

“In terms of our support of opposition groups inside of Syria…we will continue to support them,” Obama said in a press conference.

The United States is ready to work with Russia if President Vladimir Putin can broker with Syrian President Bashar Assad and Iran a political transition in Syria, Obama also said.

"I said to Mr. Putin that I would be prepared to work with him if he is willing to broker with his partners, Mr. Assad and Iran, a political transition, we can bring the rest of the world community to a brokered solution."

On Monday, Obama and Putin held rare bilateral talks on the sidelines of the UN General Assembly in New York. The leaders' discussion primarily focused on the crises in Syria and Ukraine, as well as the need to strengthen anti-terrorism cooperation.

The Russian Defense Ministry said that during the first two days of the operation the country’s aircraft hit over 10 targets, among them an explosives factory, an arms depot and an ISIL coordination center.

The Obama administration insisted that they would continue air operations in Syria, and would welcome Russia’s contribution in the fight against the ISIL, as long as Moscow’s air operation was "genuine."