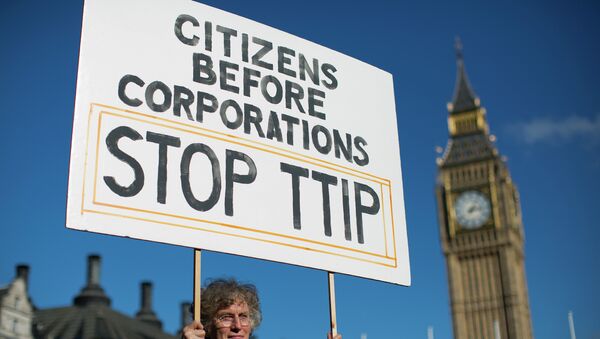 "The more we have free trade agreements that really go 'WTO plus,' the more we will see regional trade disputes as well," Joost Pauwelyn, a professor of international law at the Graduate Institute in Geneva, said at the WTO legal panel.

Ongoing negotiations for the TTIP, TPP and TiSA deals bypass the WTO multilateral format, seeking to create trade zones that overlap with existing alignments, such as the North American Free Trade Agreement (NAFTA).

BRICS, WTO Members Should 'Multilateralize' TTIP, TPP - Ex-EC Official
"We already have so many regional trade agreements, and we also have an increasing number of double 'free trade agreements.' In other words, if TPP gets concluded, and we take for example the US-Mexico relations, we would have NAFTA on top of the TPP," Pauwelyn said.

"So we will have huge legal problems on how we read different regional trade agreements between the same countries in a consistent manner," he observed.

The Trans-Pacific Partnership (TPP) and the Transatlantic Trade and Investment Partnership (TTIP) are wide-ranging deals currently in negotiation between Washington and 11 Pacific nations, and Europe, respectively. The deals could see the creation of a huge protectionist trade market. TISA is currently being negotiated by 24 WTO members, including the European Union.

All three hotly-debated deals have raised concerns due to the secretive nature of the ongoing talks and the lack of access to treaty terms.