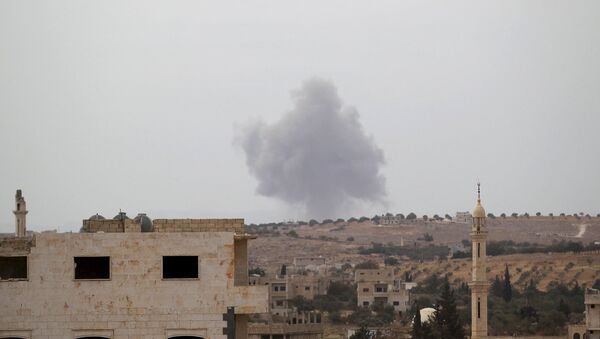 © REUTERS / Khalil Ashawi
Subscribe
Saudi Arabia is nervous about Russia’s military operation in the Middle East. The Saudis fear that Russia may displace the United States as a regional power, DWN reported.

The most important US ally, Saudi Arabia, is concerned about Russia’s activities in Syria and called on Russia to immediately stop its airstrikes in the country, DWN wrote

The government in Riyadh is anxious about the recent military operations around the cities of Homs and Hama, Saudi Arabian Ambassador Abdalla Al-Muallimi said on Wednesday in front of the United Nations in New York.

US, Russia Hold First Deconfliction Talks on Syria
The ambassador claimed that the attacks have hit regions where there weren’t any ISIL terrorists and that airstrikes affected innocent civilians, but failed to provide any evidence.

According to DWN, Saudi Arabia is afraid to lose the US as its ally, because an alliance with the latter is profitable for Saudis economically.

Moreover, the US supports Saudi Arabia’s illegal war against Yemen, and the Saudis fear that “reorganization” of the Middle East by Russia can force them to withdraw their troops from Yemen.

On Wednesday, Russia launched an aerial campaign, in Syria at the request of Syrian President Bashar Assad, targeting eight IS military hardware, arms and fuel depots.

The Russian Defense Ministry confirmed on Thursday that it has already carried out some 20 combat missions in Syria since the campaign started.