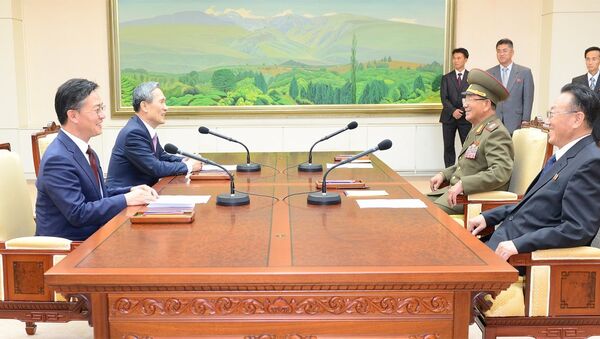 UNITED NATIONS (Sputnik) – The Korean War of 1950-1953 ended with an armistice agreement, signed by the United States and North Korea. The agreement was meant to ensure a cessation of hostilities on the Korean peninsula until a final peace settlement was achieved. South and North Korea are still formally at war, as no final peace treaty was ever signed.

Asia
As China Rises, US Deploys Most Advanced Aircraft Carrier to Boost Japan
North Korea will be ready to hold talks, so as to prevent conflicts and armed confrontation on the Korean peninsula once the United States agrees to replace the armistice agreement with a final peaceful settlement, Ri Su Yong said on Thursday.

Tensions between the two Koreas escalated in late August when cross-border artillery fire erupted along the Demilitarized Zone (DMZ), prompting Pyongyang to declare what it described as a "semi-state of war." The two countries eventually defused tensions after a series of talks.

The United States has been supporting South Korea in its stand-off with the North. Joint US-South Korea exercises, condemned by Pyongyang, have been held annually since 2011.