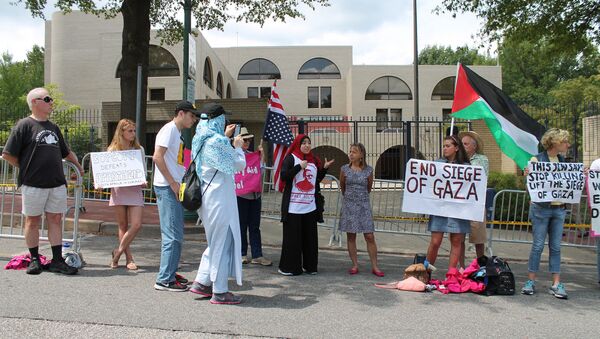 Lavrov Sees Little Progress in Israeli-Palestinian Reconciliation
The first report, released by the Center for Constitutional Rights (CCR) and Palestine Legal, reveals the growing suppression of speech critical of Israel.

The report cites "the increasingly central role universities play in the movement for Palestinian rights" as triggering the crackdown. Various actions and protests against human rights violations perpetrated against Palestinians, organized by students, have shown to be effective, and that's what prompts restrictive countermeasures.

"Fearful of a shift in domestic public opinion, Israel's fiercest defenders in the United States — a network of advocacy organizations, public relations firms, and think tanks — have intensified their efforts to stifle criticism of Israeli government policies," the report, entitled "The Palestine Exception to Free Speech: A Movement Under Attack in the US" reads.

Last year, Palestine Legal responded to 152 incidents of suppression of advocacy for Palestinian rights, and only halfway through 2015 the organization had already responded to 140 incidents, numbers that show schools are increasingly being turned into ideological battlefields.

The strategies are diverse and quite creative, from official denunciation to targeted legislation.

"Even if they fail to shut down your activism, they can frighten, intimidate, and wear you down," said doctoral candidate at the University of California at Los Angeles Rahim Kurwa.

Middle East Quartet Stresses Urgency of Israel-Palestine Conflict Solution
A second report, "Stifling Dissent: How Israel's Defenders Use False Charges of anti-Semitism to Limit the Debate Over Israel on Campus," released by Jewish Voice for Peace, brings to light the tactic of equating criticism of Israel with anti-Semitism, and all Jews — with the Israeli state. Ironically, this does profound damage to Jewish communities, CommonDreams.org reported.

According to researchers, wrongful accusations of anti-Semitism and terrorism, legislation aiming at restricting Palestinian advocacy and other repressive measures undermine debate that must be permitted because "the decades-old Israeli military occupation, the refugee status of millions of Palestinians, and the expansion of Israeli control over Palestinian life and land are among the most urgent social and political issues of our time."

Both reports, however, mark the growing number of movements in US universities and colleges despite the repression.

"Even in the face of a variety of repressive measures, the movement for Palestinian rights continues to draw strength from the force of its ideas and the real prospect that changes to US public opinion —and one day access to justice for the Palestinian people — are indeed possible," the report by Palestine Legal and CCR concluded. "Legal, political, and educational institutions should permit this important debate to continue freely, lest they find themselves on the wrong side of history."