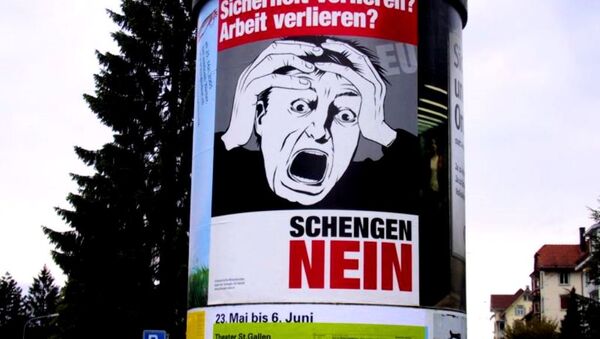 © Flickr / Jean & Nathalie
Subscribe
International
India
Africa
Russian tour operators are banging the drums over a dramatic decline in demand for trips to Europe due to new Schengen rules for Russians, who are now required to submit biometric data, including fingerprints and digital photos.

While the Schengen Visa was supposed to make travelling between its 26 member countries "much easier and less bureaucratic," new regulations imposed on tourists from Russia are seen by many as a major obstacle.

In accordance with the new rules, Russian tourists applying for Schengen visas are obliged to submit biometric data, including fingerprints and digital photos.

Furthermore, Russian applicants should be prepared to appear at the embassy of a chosen Schengen country as a part of the visa application process.

German Hypocrisy Over Open Doors Policy Divides Europe
The move has already prompted a substantial decline in demand for trips to Europe, according to Russia's major tour operators.

Countries such as Austria, France, Switzerland and Belgium have already lost 25 percent of Russia's tourist flow over the last two weeks.

At the same time, the consulates of Italy and Spain have reported about a 35 percent decline in Schengen visa applicants, compared with the same time period last year.

Russia's tour operators point to the fact that the new rules have made the visa application process inaccessible for a vast number of Russian citizens. Russians from the Far East region, Sakhalin, Buratia, Transbaikal and other distant regions have to travel tens of hundreds of kilometers to the nearest Schengen country's embassy or consulate in Russia.

Needless to say, the new rules have made the visa application process more difficult, more expensive and more bureaucratic for Russian citizens, prompting them to choose visa-free countries such as Montenegro or destinations where a visa is available upon arrival, such as Turkey.