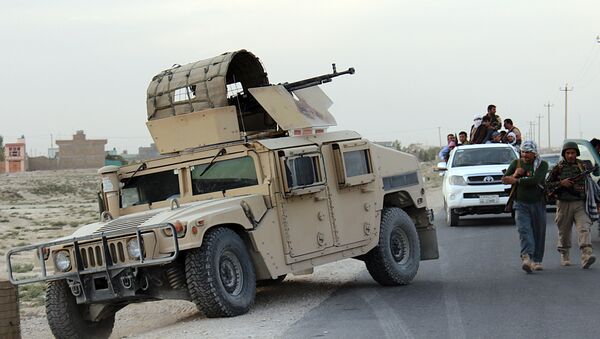 "Our fighters are now advancing toward the airport," Zabihullah Mujahid, spokesman for the terrorist group said on Twitter.

According to a reporter for German newspaper Die Spiegel, a former NATO base has also been attacked by Taliban extremists in the city of Baghlan.

Just days before the take-over, the Taliban announced that their forces had been able to capture several security bases and are on the offensive amid reports that NGOs and international organizations had fled the area ahead of an expected attack.

A month ago, International Crisis Group issued a report saying that people living in Dasht-e-Archi district in the northern Kunduz province, had said that the Taliban was forcing them to join their ranks, extorting money from them and that the militants had blocked the main route, leading to the north Badakhshan district.

Afghan gov faces difficult task of convincing insurgents they can gain more at negotiating table than on battlefield https://t.co/6ov5FKdacQ

Recent figures released by the International Organization for Migration reveal that the majority of refugees are from Syria — followed by Afghanistan; 77,680 and 11,000 respectively.

The Taliban emerged from schools and refugee camps in Pakistan in around 1994, following the Afghan civil war. The Islamic extremist terrorist group captured Kabul in Afghanistan in 1996.

But while the world's eyes watch the crisis in Syria, the gains made by so-called Islamic State extremists and what the world should do about the refugee crisis in Europe, the resurgence of the Taliban in Afghanistan appears to have slipped off the radar.

"It is a disaster for the Ghani government."

Rashid described Kabul as "totally disorganized" and having "no strategy, no ability to defend the city".

"It certainly shows the Taliban are still a united fighting force, which is different from being a united political force. They are still determined to overthrow the machine."

According to Khamma Press, commander of the NATO-led Resolute Support mission in Afghanistan, General John F. Campbell, has sent five recommendations to Washington and NATO officials in Brussels "as the Afghan national security forces are going through the brutal fighting season with the rise of the Islamic State Iraq and Syria terrorist group and the resurgent Taliban," in a situation described as "deteriorating".