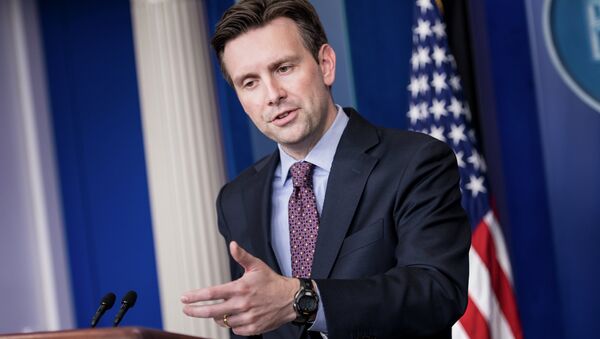 © AFP 2021 / Brendan SMIALOWSKI
Subscribe
As Russia launches airstrikes against the self-proclaimed Islamic State terrorist group in Syria, the United States has already begun its disinformation campaign. Frustrated with its own failures in combating IS, Washington is misrepresenting Moscow’s efforts.

"No sooner had [Russian Foreign Minister Sergei] Lavrov uttered his first words at the Security Council, than numerous reports emerged in Western, regional, including Ukrainian media, that the military operation carried out by Russia had killed civilians, almost as if this operation was aimed at democratic forces and the civilian population," Russian Foreign Ministry spokeswoman Maria Zakharova told LifeNews television.

"I want to tell you that all this is the very information attack, the information war we have heard so much about, and for which someone, apparently, prepared very well."

"Fighting ISIL without pursuing a parallel political transition only risks escalating the civil war in Syria, and with it the very extremism and instability that Moscow claims to be concerned about and aspire to fighting," US Defense Secretary Ashton Carter told reporters on Wednesday.

Moscow was quick to respond.

"It’s all been said by the Russian Defense Ministry," Russian Foreign Minister Sergei Lavrov said, "do not listen to Pentagon allegations about our airstrikes."

The Russian Ministry of Defence later released video of the strikes.

Washington is also reeling from embarrassing revelations about its own failed campaign to train "moderate" rebels to combat IS.  The vast majority of those trainees defected and handed over their weapons to the Nusra front.

While Western leaders have long said that Assad’s ousting is mandatory for any solution to the Syrian crisis, the Kremlin has stated its preference for regional stability and a reforms process.

"I know that President Assad understands that and is ready for such a process," President Putin told reporters. "We hope that he will be active and flexible and ready to compromise in the name of his country and his people."

During a press briefing on Wednesday, White House spokesman Josh Earnest said that the United States and Russia would continue to hold talks about Moscow’s airstrikes.

"One of the things that both President Putin and President Obama have asked their teams to do is to continue to consult, and so I would anticipate that Secretary Kerry and Foreign Minister Lavrov will have additional conversations about Russia’s activities inside of Syria," Earnest said.

000000
Popular comments
Whose side is the US on? I think the answer is becoming obvious. The US is not only ISIL's ari force, but now it's propaganda outlet.
jas
30 September 2015, 23:33 GMT6
000000
As jas astutely noted, the Outlaw Empire's now Daesh's media representative. Why else denigrate Russia's efforts to rid the region of terrorists? The Pentagon said it didn't know where the strikes occurred from one side of its mouth, then said the strikes hit civilians in populated areas out of the other. It seems the Outlaw Empire's satellites are blind over Ukraine and Syria, but only at certain crucial times.
karlof1
1 October 2015, 00:22 GMT4
000000
Newsfeed
0
New firstOld first
loader
LIVE
Заголовок открываемого материала
Access to the chat has been blocked for violating the rules . You will be able to participate again through:∞. If you do not agree with the blocking, please use the feedback form
The discussion is closed. You can participate in the discussion within 24 hours after the publication of the article.
To participate in the discussion
log in or register
loader
Chats
Заголовок открываемого материала
Worldwide
InternationalEnglishEnglishMundoEspañolSpanish
Europe
DeutschlandDeutschGermanFranceFrançaisFrenchΕλλάδαΕλληνικάGreekItaliaItalianoItalianČeská republikaČeštinaCzechPolskaPolskiPolishСрбиjаСрпскиSerbianLatvijaLatviešuLatvianLietuvaLietuviųLithuanianMoldovaMoldoveneascăMoldavianБеларусьБеларускiBelarusian
Transcaucasia
ԱրմենիաՀայերենArmenianАҧсныАҧсышәалаAbkhazХуссар ИрыстонИронауОssetianსაქართველოქართულიGeorgianAzərbaycanАzərbaycancaAzerbaijani
Middle East
Sputnik عربيArabicArabicTürkiyeTürkçeTurkishSputnik ایرانPersianPersianSputnik افغانستانDariDari
Central Asia
ҚазақстанҚазақ тіліKazakhКыргызстанКыргызчаKyrgyzOʻzbekistonЎзбекчаUzbekТоҷикистонТоҷикӣTajik
East & Southeast Asia
Việt NamTiếng ViệtVietnamese日本日本語Japanese俄罗斯卫星通讯社中文（简体）Chinese (simplified)俄罗斯卫星通讯社中文（繁体）Chinese (traditional)
South America
BrasilPortuguêsPortuguese
NewsfeedBreaking
17:06 GMTBoris's Johnson: PM Cracks Joke About his Fertility at Post-Reshuffle Cabinet Meeting
16:23 GMTTikTok Bans Hashtag Linked to Cyberbullying of French Students Born in 2010, Reports Say
16:21 GMTUS Defence Secretary Approves Request to Deploy 100 Troops at Capitol Protest
16:04 GMTCanada Caught Off Guard By New AUKUS Security Pact, Report Says
16:01 GMTRepublican FEC Member Doesn't Rule Out Bias in Twitter Banning Hunter Biden Laptop Story
16:00 GMTTel Aviv ‘Significantly’ Expanding Red Sea Presence Amid Alleged Iran Threat: Ex-Israeli Navy Chief
15:56 GMTFinal 9/11 Hearing Abruptly Cancelled at Gitmo Due to COVID-19-Related Illness - Reports
15:47 GMTDemocratic Lawyer Charged in Probe of Trump-Russian Investigation Pleads Not Guilty
15:13 GMTBlinken: US Ready to Delay New Sanctions if Ethiopia and Eritrea Act to Resolve Conflict
14:55 GMTLondon Gang Who Killed NHS Worker From 'Wrong Postcode' Jailed After Murder Sketches Found
14:53 GMTRussia Launching Trials of Simultaneous Vaccination Against Flu, COVID-19
14:30 GMTVideo: Police Act Against Climate Protesters Blocking M25 Motorway
14:15 GMTRonaldo Will Cause as Many Problems as He Solves for Solskjaer, Ex-Liverpool Player Carragher Says
14:03 GMTXi Urges SCO to 'Resist' External Meddling After US, Australia Vow to Bolster Ties With Taiwan
14:02 GMTUN Security Council Holds Meeting on Afghanistan
13:39 GMTHitting US Debt Ceiling Could Trigger Recession, White House Says
13:32 GMTUnited Airlines Briefly Grounded Flights in US, Canada Due to Computer Issues, FAA Says
13:29 GMTDutch Acting Defense Minister Resigns Over Kabul Evacuations Chaos, Reports Suggest
13:27 GMTFrance Says It Cannot Trust Australia in Trade Talks After Canberra Ditched Joint Sub Deal
13:20 GMTPiers Morgan Says His New Job Will Be 'Stuff of Nightmares' for Meghan Markle