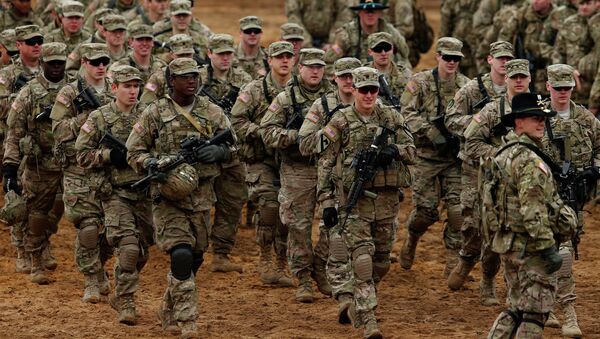 © AP Photo / Mindaugas Kulbis
Subscribe
International
India
Africa
The continuing financing of all US military operations by continuing resolution and not through a proper budget is generating a $38 billion deficit, US Defense Secretary Ashton Carter said in a press briefing on Wednesday.

WASHINGTON (Sputnik) — President Barack Obama has made clear he is prepared to veto the 2016 National Defense Authorization Act, a course of action Carter said he supported, and that he had a recommended to the president.

"Making these kinds of cuts is dangerous for our strategy and frankly its embarrassing in the eyes of the world. The world has not stood still. Russia and China have enhanced their capabilities."

The US Department of Defense has had to function under seven years off financing by continuing resolutions, "eventually resulting in a $38 billion deficit," he warned.

In a series of speeches he has given through September, Carter has repeatedly criticized at the process of automatic budget cuts — known as sequestration — designed in large part by Republican congressional budget guru, Congressman Paul Ryan, and enacted into law in 2011.

On Wednesday, Carter said that financing the US military through more continuing resolutions would unleash as much budgetary havoc on them as the sequestration cuts.