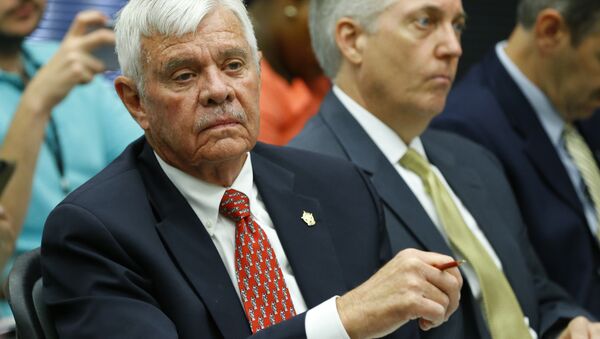 © AP Photo / Sue Ogrocki
Subscribe
International
India
Africa
An Oklahoma sheriff was indicted by a grand jury on Wednesday in relation to the case of a volunteer deputy charged with manslaughter after mistaking his gun for a taser and shooting a restrained man in April.

Sheriff Stanley Glanz was charged with two misdemeanors by grand jurors who also recommended that he be removed from office.  After news of the indictment broke, the sheriff quickly announced that he was stepping down.

The charges came as the grand jury completed a nine week long investigation into the office following the fatal shooting of Eric Harris by volunteer deputy — and long time friend of the sheriff — Robert Bates.

The counts accuse the sheriff of refusing to perform his official duties by not promptly releasing documents from the internal investigation of Bates, as well as willful violation of the law for an unrelated incident involving a stipend he received for a vehicle.

Glanz has asserted that he will plead not guilty to both counts.

Volunteer Deputy Bates has pleaded not guilty to second-degree manslaughter and has also left the department.

He has been called a “pay-to-play” deputy, as he had donated thousands of dollars in cash and cars to the office.  Many questioned whether he received special treatment due to his hefty donations.

A leaked memo from 2009 indicated that officials within the sheriff’s office knew that Bates had been inadequately trained, but pressured officers to look the other way.

One of the witnesses who testified before the grand jury was internal affairs corporal Warren Crittenden, who asserted that he was pressured to sign off on memos saying Bates was qualified for duty, Seattle Pi reported.