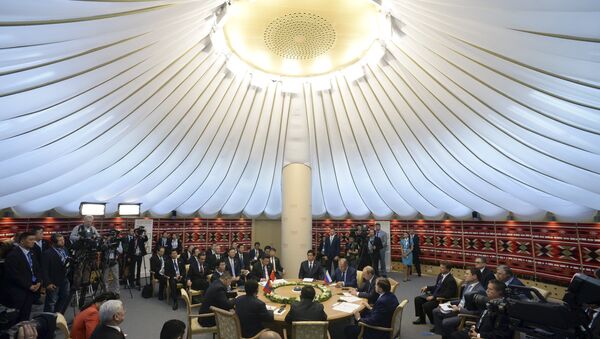 © REUTERS / SCO Photohost
Subscribe
International
India
Africa
Transatlantic Trade and Investment Partnership (TTIP) negotiators are open for dialogue with BRICS countries, but they should be willing to participate in the discussion as well, Member of the European Parliament Emma McClarkin told Sputnik on Wednesday.

No Guarantee TPP Talks Will Conclude in Two Weeks

The Transatlantic Trade and Investment Partnership (TTIP) between the European Union and the United States is aimed at creating the world's largest free trade zone that would account for 60 percent of global production. The deal drew criticism from the public for the lack of transparency in its negotiations and the power it would give to international corporations. It has also been slammed for bypassing WTO framework and excluding BRICS countries.

"As for the concerns about BRICS countries being excluded, we are always open to discussions, but they have to be as willing to join us as well. If we all work together, we have to agree on rules that we can all sign up to," McClarkin said.

French Trade Minister Slams Secrecy Over TTIP Deal
The US-EU TTIP’s stated goal is to ease the flow of goods and services across the Atlantic. It is currently being negotiated in unusual secrecy, receiving strong criticism in Europe. The opponents of the deal claim it threatens the principles of democracy, environment, consumer and labor standards.

TTIP and TiSA are comprehensive and hotly-debated trade agreements currently negotiated in unusual secrecy by the United States with the European Union, as well as both Caribbean and Pacific nations.

"Now when you have a look at multilateral discussions, they have been going on for some 20 years. We still have not seen any real movement on the conclusion of the Doha round [on trade rules among WTO countries]. In the time in between, do we stop trading? No. Do we still need to be working towards raising opportunities and economic stability? We absolutely do," McClarkin said, adding that TTIP and TiSA is what is "moving discussions on trade forward."

She also noted that the Europeans would prefer to promote economic growth opportunities at the multilateral level.

US Seeks to Disband Europe to Prevent Close Ties With BRICS
"But if that is not possible, then we are going to seek possibilities around the world," McClarkin added.

TTIP is a deal between the European Union and the United States aimed at creating the world's largest free trade zone that would account for 60 percent of global production.

TiSA is a proposed international trade treaty between 24 parties, including the 28 member states of the European Union, and the United States, aiming to lower trade barriers in the services markets that the United States and other countries have been keen to penetrate for decades.

Opponents of the controversial deals fear they would give excessive power to international corporations to take countries to court and serve predominantly US interests.