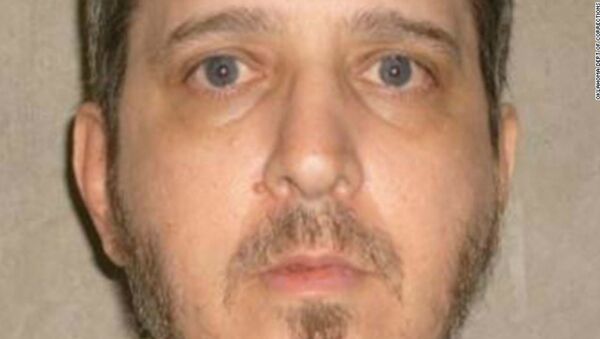 © Oklahoma Dept of Corrections
Subscribe
On Wednesday, the state of Oklahoma was prepared to execute a man despite a mountain of evidence proving his innocence, and a request from the Pope himself to commute the death sentence. As his name trended globally on social media, the governor called for a last minute stay until November 6.

Innocent Man on Death Row for 30 Years Died Hours Before Judge Cited Him
Richard Glossip, 52, was set to be sent to a death chamber for a lethal injection shortly after 4 PM (CDT) on Wednesday for allegedly hiring a hitman to murder Barry Van Treese, the owner of a motel that he was managing in 1997.

The execution had been temporarily postponed awaiting a decision from SCOTUS on whether or not to provide a stay of execution. They opted not to issue a stay.

The man who actually committed the murder, Justin Sneed, is serving a life sentence thanks to a deal he made testifying against Glossip.

There was no physical evidence linking Glossip to the crime.

The evidence that did exist against Glossip largely amounted to the word of Sneed, who was 19 years old at the time, and trying to avoid an execution himself.

Last week, a letter was sent by Archbishop Carlo Maria Vigano on behalf of Pope Francis, asking the state to spare his life.

"I believe that a commutation of Mr. Glossip's sentence would give clearer witness to the value and dignity of every person's life, and would contribute to a society more cognizant of the mercy that God has bestowed upon us all,” the letter read in part.

On Monday, the Oklahoma Court of Criminal Appeals denied a request to halt Glossip’s execution, despite new statements from jailhouse informants who have asserted Sneed confessed to setting Glossip up to take his fall.

“The substantial risk of putting an innocent man to death clearly provides an adequate justification for holding an evidentiary hearing,” his lawyers wrote in a motion to the US Supreme Court.

The court ruled however, that these statements were not new or compelling enough to postpone killing a man so they could be further explored.

Previously, an appeals court had thrown out Glossip’s conviction, citing the fact that evidence against him was “extremely weak.”  In 2004, the case went back to trial and a second jury opted to uphold the death sentence.

Despite calls for a pardon from activists, community members, religious leaders, and even celebrities such as Susan Sarandon, Republican Governor Mary Fallin repeatedly stated that Glossip was rightly convicted and deserved to die.

"Over and over again, courts have rejected his arguments and the information he has presented to support them," Fallin wrote in a statement prior to his execution. "If a state or federal court grants Glossip a new trial or decides to delay his execution, I will respect that decision. If that does not happen, his execution will go forward on September 30."

Glossip’s execution had been stayed three times in the past.

Last winter, he challenged the Supreme Court regarding one of the drugs in the deadly concoction used for lethal injections.  Glossip claimed that midazolam, a sedative, can cause undue suffering as it does not achieve the level of unconsciousness required for surgery.

The drug caused global outrage in April 2014, when Clayton Lockett writhed and moaned in agony for 43 minutes before he finally died.

Three months prior, Dennis McGuire in Ohio struggled for air for at least ten minutes of his 24-minute-long death.

Innocent Man Awarded $2.3M After Being Held in Solitary for 15 Months

In August of the same year, Joseph Wood in Arizona struggled to breathe for an hour and 40 minutes before dying approximately two hours after the injection was administered.

The court ruled against Glossip’s challenge of the drug in June, deciding that it does not violate the US Constitution’s ban on cruel and unusual punishment.

Alabama, Arizona, Florida, Louisiana, Oklahoma and Virginia are currently the only states that allow the use of the controversial drug in their death cocktails.

Two weeks ago, just hours before he was scheduled to be put to death, the state appeals court halted the process to consider new evidence.

Now, on September 30, 2015, Glossip was to become the first person executed using midazolam since the ruling he fought so hard against this summer.

His name trended globally on Twitter as supporters begged the Governor to intervene.

At the very last moment, approximately an hour after he was due to be executed, Governor Fallin issued a stay until November 6.