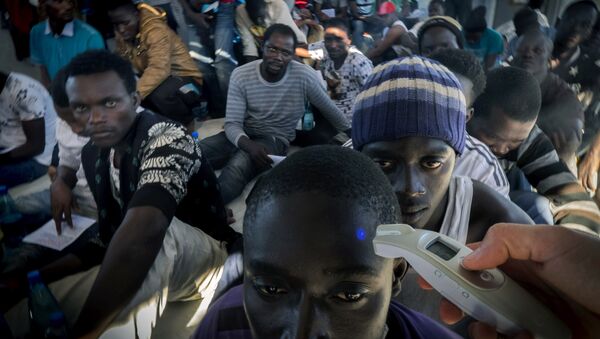 © AFP 2021 / Ricardo Garcia Vilanova
Subscribe
Spanish lawmaker and head of the Group of the European People's Party Pedro Agramunt called for cooperation with African entities, including the African Union, on regional crises to ensure peace and safety in Europe.

STRASBOURG (Sputnik), Daria Chernyshova — The EU refugee crisis is part of a global problem, as several Middle East countries have taken in many more refugees than Europe, Spanish lawmaker and head of the Group of the European People's Party Pedro Agramunt said Tuesday.

"The situation in Europe is just the smallest component of a global crisis. The countries in the Middle East, bordering Syria and Iraq, where the conflict has displaced millions of people over a number of years, have accepted many more refugees than Europe," Agramunt said.

The lawmaker called for cooperation with African entities, including the African Union, on regional crises to ensure peace and safety in Europe.

Concerted, Unified Actions Needed to Ease Migration Crisis
Also Pedro Agramunt stated that the refugee crisis in Europe will test the bloc's ability to find a common solution to the issue.

"The refugee crisis is putting Europe to the test with respect to its ability to find a consensus, and if we fail in the refugee issue, then we will not see the Europe which many of those present here wished to see," Agramunt said, addressing the Parliamentary Assembly of the Council of Europe (PACE).

The four-year Syrian civil war has created the highest refugee population in the world, with over 4 million people fleeing to neighboring Jordan, Lebanon, Turkey, Iraq, and Egypt, and another 7 million displaced within the country, according to UN data.

The European Commission estimates that some 500,000 people from the Middle East and North Africa have arrived in the bloc since the beginning of 2015.