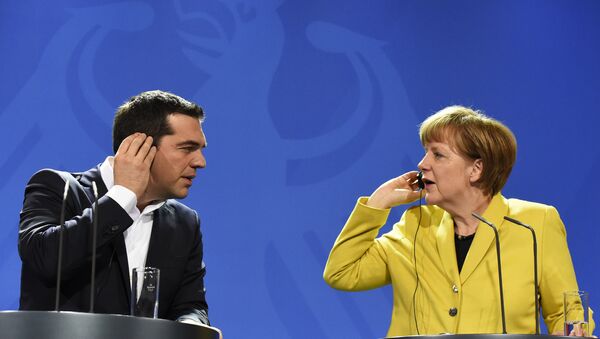 The Greek Kathimirini newspaper reports that the Greek government took tactical advice from the US government prior to negotiations with EU leaders, in the hope of emerging from the Grexit crisis victorious.

From Austerity to Insanity: What’s in Store for Greece
The Greek government took regular advice from Washington on the best way to negotiate with the German government during talks with the European Union on the debt crisis that threatened the future of the Eurozone, reported the Greek Kathimirini newspaper on Sunday.

According to the report, Greece's Ambassador to the US, Christos Panagopoulos, was in regular contact with the US government in the run up to the showdown talks between the Greek government and European Union leaders, headed by Angela Merkel, German Finance Minister Wolfgang Schauble, and Francois Hollande.

The debt crisis, dubbed 'Grexit' as it threatened the departure of Greece from the Eurozone and its potential consequent breakup, ended in July when Greece received a third bailout from its creditors in the EU and IMF, in return for surrendering its fiscal sovereignty to supervision from EU and IMF institutions.

Varoufakis Describes Tsipras’s Agreement With Creditors As 'Mistake'
According to Kathimirini, in the run up to the crisis Washington advised the Greeks on the best way to ensure it could stay in the Eurozone under favorable economic conditions, including an attempt to create a broad alliance of EU countries to oppose Germany's tough stance against a debt write-off.

"The US made it clear that the coalition would have to convince these countries that it was serious about implementing reforms if they were to then, in turn, offer their support," writes Kathimirini, listing the UK France, Italy and Austria as those which the US felt would be receptive to the approach.

"The Greek ambassador suggests that the US government also encouraged the International Monetary Fund to be vocal on the issue of debt relief," and also pushed NATO representatives to announce their worries about a potential Grexit, reports the newspaper.

"Washington’s strategy was to stress the geopolitical importance of keeping Greece in the single currency and the need for the eurozone to agree a further reduction of Greek debt."

Despite Washington's expertise, the Greek government failed in its attempt to extract concessions from the Germans before it agreed to a third bailout deal from creditors.

On July 12, 17 hours of crisis talks ended in defeat for the Greek government, which was compelled to accept a loan package worth €82 bln-€86 bln [$91 bln-$96 bln] over three years, in return for painful tax hikes, pension cuts, and liberal reforms to the labor market. In addition, the Greeks were forced to surrender their fiscal sovereignty over €50 bln [$56 bln] of national assets that were transferred to an independent fund, supervised by EU institutions.