Cold as Ice: All Three Major Canadian Parties Vow to be 'Tough on Russia' 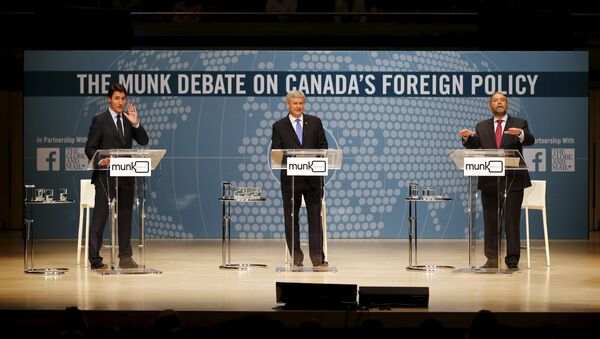 © REUTERS / Mark Blinch
Subscribe
With all three of Canada's major political parties pledging that they would continue the Harper policy line of being 'tough on Russia', it doesn't seem that the icy relationship between the two northern neighbors will thaw any time soon, regardless of who wins the parliamentary elections next month.

On Monday night, with the eyes of the world focused on the speeches being given by world leaders at the UN General Assembly in New York, the leaders of Canada's three major parties held another debate ahead of parliamentary elections next month, this time focusing on foreign policy.

The leaders demonstrated that they have arrived at a consolidated 'tough on Russia' stance as far as their northern neighbor is concerned, with Prime Minister Stephen Harper of the Conservative Party vowing that Ottawa would not "tolerate" Russia's "occupation" of Ukrainian territory.

Emphasizing his experienced leadership, Harper said that he has "met with Mr. Putin many times and everybody knows, of course, when it came to Ukraine I made it very clear to Mr. Putin that Canada, this country, is never going to tolerate or accept under any circumstances his occupation of Ukrainian territory."

Canada Meat Industry Loses $500Mln Over Anti-Russia Sanctions
Justin Trudeau, leader of the Liberal Party, looking to see his party claw its way back into the 'big two' of Canadian politics following a surprise thumping by the social democratic New Democrats at elections in 2011, demonstrated that he too could talk tough on Russia.

The son of late former Canadian Prime Minister Pierre Trudeau called President Putin a "destabilizing force in the world," bashing Harper by suggesting that "Canada has such a diminished voice on the world stage that Mr. Harper hasn't noticed that Vladimir Putin didn't listen to him when he told him to get out of Ukraine."

Trudeau's father, who served as prime minister from the late-1960s to the mid-1980s, actually sought to mend relations with the Soviet Union, and to break out of the East vs. West mentality.

Social media reacted to the debate moderator's setup to Trudeau's remarks by noting that the debate audience literally burst out laughing after the moderator asked Trudeau a hypothetical scenario about how he would deal with the Russian president.

Most telling moments of Munk Debate on foreign policy Moderator asks Trudeau how he would deal with Putin. Audience laughs.

New Democratic Party leader Tom Mulcair didn't want to be left out of the debate's Russia-bashing, emphasizing that his party "stands foursquare with the people of Ukraine against this Russian invasion."

He added that Putin's statements at the UN "are cause for concern for all of us…This is a time for Canadian values to be projected into that situation."

Quickly shifting the debate back to domestic politics, Mulcair turned to attack Trudeau over his alleged inability to challenge Harper on Bill C-51, a controversial new Anti-Terrorism Act which Liberal lawmakers supported. "You can't even stand up to Stephen Harper on C-51. How are you going to stand up to Putin?" Mulcair asked.

And BOOM Mulcair kneecaps Trudeau: If you can’t stand up to Harper on C-51, how can you stand up to Putin?

Trudeau would be a lot more credible in his criticisms of C-51 if he hadn't, you know, voted for it.

Political pundits took note of the fact that the debate repeatedly veered off from foreign policy, chalking it up to Ottawa's perceived limited influence on global affairs in recent years, especially given the country's decision to align so closely with the policy positions of its superpower southern neighbor.

The foreign policy issues being discussed at Munk debate — ISIS, Russia/Ukraine, refugees — are ones Canada largely has zero influence on.

@morningshowlisa gave up on the munk when they established the PM should have a level of influence over Putin. Time to turn that noise off!

@VyeOne Putin laughs at Stephen Harper.He acts like he is merely flicking a flea off of him. Harper is like a nipping Chihuahua Munk Debate

Canada's Role in the Ukraine Crisis

Following the emergence of the political and military crisis in Ukraine, Canada emerged as one of the most adamant supporters of Ukraine's post-Maidan authorities, and as one of Russia's most prominent critics on the world stage, alongside the United States. The Harper government went so far as to vote against a Russian-sponsored UN resolution last year condemning the glorification of Neo-Nazism and racism-driven crime, possibly worried that the resolution would make radical forces in Kiev look bad.

US, Canada Defense Ministers Promote Ukraine Training at NATO Meeting - DoD
Earlier this year, Ottawa was embroiled in scandal following the release of a report indicating that the Canadian Embassy in Kiev had been used as a safe haven by anti-government protesters looking to topple the unpopular but democratically elected Ukrainian government of Viktor Yanukovych during the Maidan protests. The report revealed that protesters used the embassy's lobby as an encampment, something Harper and Canada's foreign affairs office had previously refused to comment on. The revelations led to uncomfortable questions from Canada's European allies, who voiced their concern about what appeared to be evidence of Canada's direct participation in regime change.

A scandal also blew up this summer around Canada's possible involvement in the training of ultranationalist and neo-Nazi volunteer militia forces, including the notorious Azov Battalion, accused of committing war crimes in eastern Ukraine. Canadian officials initially brushed off criticisms by noting that the Ukrainian military was responsible for the screening process for the men being trained by the 200 Canadian troops participating in the US-led training effort in western Ukraine.