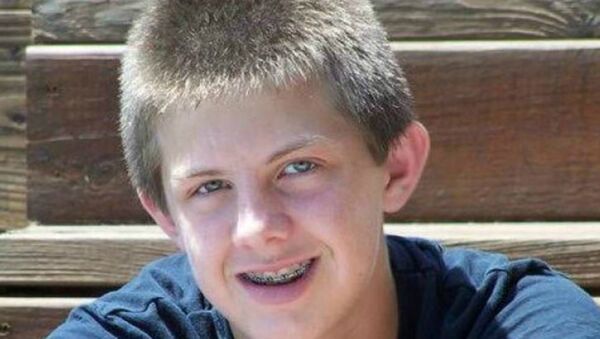 Highly disturbing new information is coming to light thanks to a lawsuit filed by the family of 19-year-old Zachary Hammond, the South Carolina teen fatally shot in the back by police during a small marijuana bust.

The suit alleges that the officer, Lieutenant Mark Tiller, who shot and killed Hammond, threatened to “blow his head off” before he fired, and another officer high-fived the teen’s lifeless body after he was killed.

Tiller has not yet been charged for the teen’s death, nor has the department released dashcam videos or any other documents pertaining to the case.  The family has stated that part of their reason for filing the lawsuit is to force the Seneca Police Department to release the footage.

Solicitor Chrissy Adams and state investigators maintain they will not release the footage while the case is still open.

Hammond’s family is also in the midst of another lawsuit to have Adams removed from the case, as she works with the officers involved.  She refuses to decide whether Tiller will face charges until the state supreme court makes their decision in that suit, and “federal and state investigators answer some more questions,” the Associated Press reported.

The family has spoken to the woman who was in the vehicle with Hammond, reviewed private surveillance footage, and has had a private autopsy performed on the teen’s body.

The shooting took place after Hammond took Tori Morton on a first date, on July 26.  The lawsuit states that they had visited a McDonald’s to get ice cream, and then went to a Hardee’s so that Hammond could buy a hamburger.

When the pair arrived at Hardee’s, however, undercover police were waiting.  They allege that they had arranged a drug deal with Morton.

As the police pulled up to Hammond’s car, he reportedly tried to drive away.

Tiller claims he thought Hammond was going to try to run him over, but the private autopsy confirmed that the teen was shot in his back and in his side, meaning that any perceived threat would have already had passed when he was killed.

The lawsuit also claims that there was a pause between the first and second shots, and that after being shot the first time, Hammond looked over at his date.

"'I'll blow your (expletive) head off,' were the last words heard by Zachary Hammond," The lawsuit states.

The police claim that small amounts of drugs were found on both of the teens. Morton was charged with misdemeanor drug possession.

Hammond was pronounced dead upon the arrival of paramedics.  His body was then left on the ground for 90 minutes, where it was reportedly attacked by ants.

Once other investigators arrived, an officer was reportedly seen high fiving his corpse.

The Seneca Police Department has now hired a public relations firm to represent them.