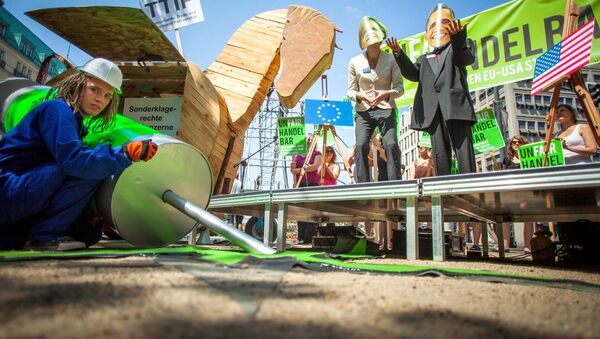 © Flickr / campact
Subscribe
International
India
Africa
French trade minister Mathias Fekl has criticized the negotiations for the Transatlantic Trade and Investment Partnership (TTIP) EU-US free trade agreement as being "not transparent", warning the talks could come to an end.

EC President Juncker Calls for Maximum Transparency in TTIP Deal
The controversial TTIP agreement, under negotiation between the European Union (EU) and the United States could lead to the world's largest free-trade area. Yet, although this could help to boost economic growth and create jobs on both sides of the Atlantic, there are concerns about the consequences the deal could have.

Critics have slammed the talks for being secretive and being dominated by multinational lobby groups keen to ensure a market free from over-regulation. There has also been criticism of the decision to withhold documents close to the talks, many of which can only be accessed from a secure room at the US embassy.

Fekl said the talks could stumble because of US intransigence, and said France is growing impatient and warned of the talks breaking down.

Fekl, in an interview with French newspaper Sud Ouest, published on Monday said:

"Europe made multiple offers, on all issues, and in return got no serious offer for the Americans, neither on access to their public procurements, nor on access to agricultural and food-processing markets, which remain closed," Fekl said. 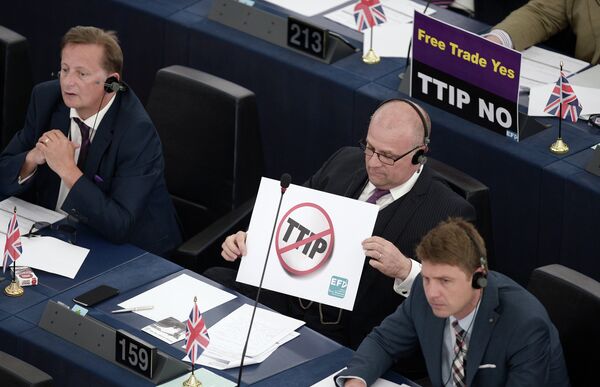 The European Commission has been negotiating with the US since July 2013 and the talks have been extremely slow. US President Barack Obama has called for the negotiations for the world's biggest trade agreement to be speeded up, and was hopeful that a deal could be agreed by the end of 2015.

The EU and the US already trade goods and services worth USD$2.24 billion (€2bn) every day, but the TTIP would create further growth and new opportunities by eliminating red tape and tariffs wherever possible to reduce costs and open up new markets.

However, critics say the TTIP will pave the way for huge multi-nationals to have more controlling powers than governments. Central to the talks is the issue of investor-state dispute settlement, or a version of it, that gives shareholders the power to sue governments if regulatory issues cause financial harm to a company.

According to the Gala Foundation, the TTIP's regulatory harmonization will ignite a "race to the bottom" of environmental regulations in the EU, so that they come to resemble the USA's far weaker regulatory system.

Many analysts agree that TTIP is a Trojan horse for big food corporations, aiming to avoid food safety regulations and undermine sustainable agricultural practices in their rush for profits and trade.

#TTIP is a threat to our food safety. Find out why: https://t.co/znRzi0StLo pic.twitter.com/ENIeIKEgLN

"For the first time on a grand scale, corporations would be able to sue governments if they make public policy decisions which could harm their future profits. Regulation which currently protects people, public services and the environment could be removed."