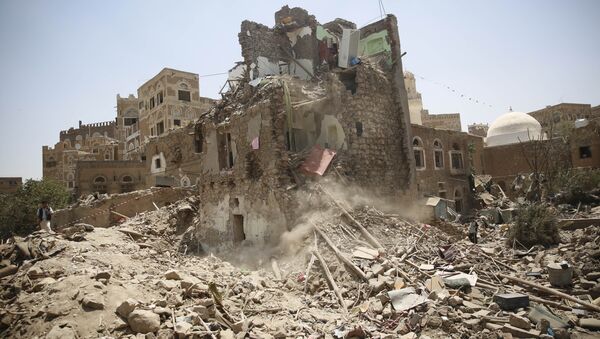 At least 40 people, most of them women and children, were killed and many were wounded after a suspected coalition airstrike hit tents at a wedding party on Monday in the village of al-Wahijah near Mokha, a seaport on the Red Sea on Monday, witnesses say.

“The bodies of 31 people, including children, have been taken to a hospital in Mokha,” a medical source was quoted as saying to AFP.

He later raised the death toll to 40, and said dozens of severely wounded people were brought to area hospitals.

“This is a new crime that is added to the massacres committed by the Saudi regime against the people of Yemen,” Saba news agency, which is under rebel control, reported, citing official statements accusing the Saudi-led coalition of the bombing.

Coalition spokesperson Brigadier-General Ahmed al-Asseri denied the allegations in a statement to Reuters, saying that coalition aircraft had conducted no flights in the area during the last three days and suggested local residents may have confused an airstrike with artillery fire.

“The coalition knows its responsibility and will always acknowledge a mistake if we make it,” the statement read. “Take into consideration the chaotic situation in Yemen, with several armed elements and forces active around the country. Also, people sometimes cannot distinguish between canon, mortar and Katyusha (rockets).”

Saudi-Led Coalition Airstrikes Kill 65 Civilians in Southwestern Yemen
The coalition of nine Arab states led by Saudi Arabia launched an air campaign in Yemen in March 2015, with the aim of defeating the Houthis and restoring Yemen's exiled government.

The United Nations earlier said that around 5,000 people have been killed in the violence, almost half of them civilians.

Yemen has been plagued by violence between Houthi rebels, who forced the country’s government to resign, and supporters of Yemen's president-in-exile Abd Rabbuh Mansur Hadi.

In late April, the coalition announced it would end its military operation in the country, but air strikes have continued.