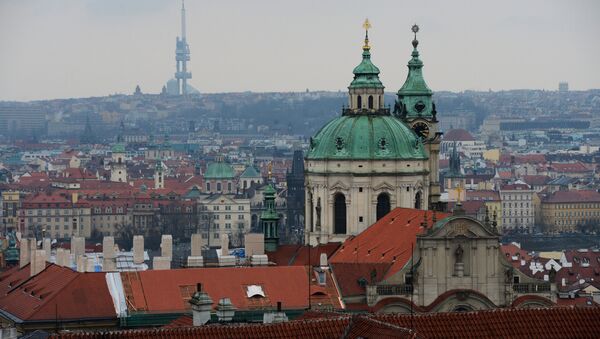 About 100 people participated in protests against Czech Republic's membership in NATO in Prague.

PRAGUE (Sputnik) — About 100 people assembled in the Czech capital of Prague, on Monday, demanding the country's withdrawal from NATO, local media reported.

The meeting was organized by the No Base initiative, which is against the deployment of US troops and infrastructure in the Czech Republic, along with parliamentarians and civic activists, the Ceske Noviny news portal reported.

NATO, UN Flags Mixed Up by Czech President’s Office
The demonstrators criticized NATO's aggressive policies and condemned the country’s leaders who negotiated the Czech Republic's accession to the alliance, including former presidents Vaclav Havel and Vaclav Klaus and former Defense Minister Alexandr Vondra, who had also previously served as the country's foreign minister.

The protesters are said to have called on the authorities to adopt a constitutional amendment, promoting peace.

Since its establishment in 1949, NATO has seen several waves enlargements, most notably following the end of the Cold War, when many states formerly within the Soviet sphere of influence joined the alliance. The Czech Republic, along with Poland and Hungary, joined NATO in 1999.