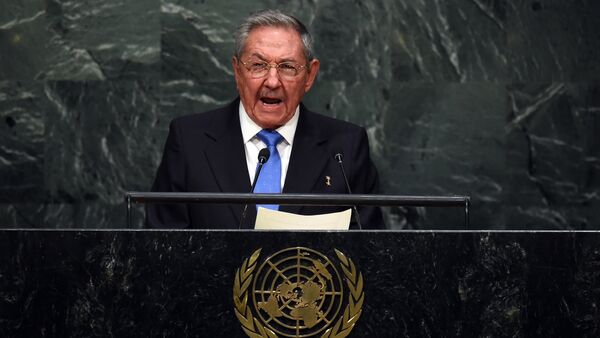 “Diplomatic relations have been reestablished between Cuba and the United States. Now, a long and complex process begins towards the normalization of relations,” Castro stated. “This will only be achieved with the… return to our country of the territory illegally occupied by the Guantanamo naval base, the cessation of radio and TV broadcasts, and of subversive and destabilizing programs against the island.”

Castro also called for slavery reparations to be made to the Caribbean nation, and for Puerto Rico to gain independence after more than a century of US colonial domination.

Raúl Castro got an extended and standing ovation 🇨🇺🇨🇺🇨🇺

US Awaits Congress’ Decision to Transfer Gitmo Prisoners - White House
The prison camp at Guantanamo Bay gained global notoriety as the site of torture of hundreds of detainees, many of whom have been held for over a decade with no charges, in the US’ War on Terror following the September 11 attacks on New York, Washington, D.C. and rural Pennsylvania.

After taking office in 2009, President Obama pledged to close the prison, and has released or transferred more than half of the prisoners held there. According to the Congressional Research Service, however, there are still 112 prisoners left in the detention center.

Guantanamo Bay still exists @POTUS, will you actually make a real difference before your term ends or nah

“Guantanamo should have been closed years ago,” US Senator Patrick Leahy told Sputnik last month of the US prison facility in Cuba.

Leahy explained that a “group of some very conservative members of Congress” have so far blocked US President Barack Obama from fully shuttering the prison despite his promise to do so.

Outside Vatican Embassy in DC on a cold Jan. day: reminding @Pontifex to ask Congress to close #Guantanamo. #PopeInDC pic.twitter.com/6QZLQKmL21

The United States and Cuba officially restored diplomatic ties on July 20, 2015, when they reopened embassies in Washington, DC and Havana.

The US’ full trade embargo on Cuba, in place since 1962, is one of the longest standing trade embargoes in US history, and has yet to show signs of being lifted.