Russia May Consider Special Ground Operation in Syria in Future 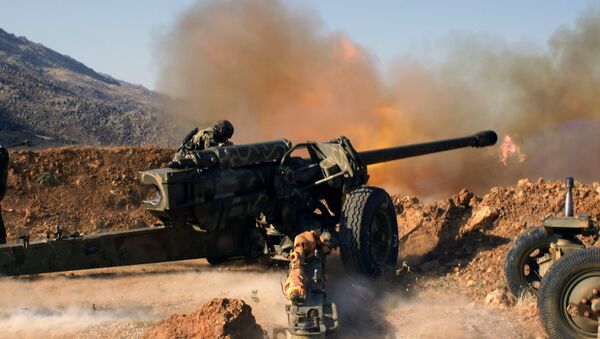 © Sputnik
/
Go to the photo bank
Subscribe
French lawmaker Nicolas Dhuicq said that perhaps, at some point, Russia will realize a need for some special forces on the ground in order to help destroying certain targets.

Russia currently has no plans to participate in military operations on the territory of Syria or other countries in the region, Russian President Vladimir Putin said in an interview with Charlie Rose for the CBS and PBS channels on Sunday.

"Russia continues to help Syria by providing the Syrian Army with the information through air reconnaissance from the aircraft. Perhaps, at some point, Russia will realize a need for some special forces on the ground in order to help destroying certain targets," Dhuicq, a member of the Defense Commission at the French National Assembly, said.

Syria has been in the state of a civil war since 2011. Government forces have been fighting against opposition factions and numerous extremist insurgent groups, including Islamic State and the Nusra Front.

The United States does not believe that Syrian President Bashar Assad’s government is legitimate, and has been launching airstrikes against ISIL positions in Syria since 2014, as well as training opposition forces, within the framework of an international coalition.

Russia, on the other hand, considers the Assad regime to be legitimate, and has been supporting it militarily. Moscow has pointed out that the US-led coalition’s actions in Syria lack legitimacy because they are not coordinated with the Syrian government or the United Nations.

Ships With Humanitarian Aid From Russia Arrive in Syria
Nicolas Dhuicq, a French lawmaker, also said that the creation of a joint information center by Russia, Syria, Iran and Iraq to coordinate the fight against the Islamic State (ISIL) extremist group is an important step to overcome instability in Jordan and Lebanon caused by ISIL atrocities.

Russian President Vladimir Putin stated in an interview with Charlie Rose for the US-based CBS and PBS channels that he has personally spoken with the heads of Turkey, Jordan and Saudi Arabia about the establishment of a coordination structure to counter ISIL, adding that the United States has been made aware of the developments.

"The establishment of a coordination structure to fight the ISIL is important for the region. For example, the main threat for Jordan is 1 million refugees from Syria and it is a factor of major destabilization. I am very preoccupied by the stability of Jordan. The same is true for another Syrian neighbor — Lebanon that is in a state of political turmoil while unable to elect a president," Nicolas Dhuicq, a member of the Defense commission at the National Assembly, observed.

Meanwhile, the King of Jordan said in his address to the UN General Assembly on Monday that the international community must support Jordan and Lebanon, which have both accepted millions of Syrian refugees.

According to Dhuicq, ISIL has created structures on territories under their control in Syria and Iraq that show a similarity to a state structure as the extremists receive salaries for their activities.

"The question is where does the money come from? It probably comes from Saudi Arabia and Qatar. The questions that Saudis need to ask themselves is if their creation is still under the control of its own masters," Dhuicq noted.

Both Arab states must watch closely the great potential of the work of the anti-ISIL coordination center, he added.

The information center will focus on collection, processing, summarizing and analyzing Middle East data in the context of the fight against ISIL. The program will make available relevant information to be rapidly distributed to Russian, Iranian, Iraqi and Syrian general staffs.

000000
Newsfeed
0
New firstOld first
loader
LIVE
Заголовок открываемого материала
Access to the chat has been blocked for violating the rules . You will be able to participate again through:∞. If you do not agree with the blocking, please use the feedback form
The discussion is closed. You can participate in the discussion within 24 hours after the publication of the article.
To participate in the discussion
log in or register
loader
Chats
Заголовок открываемого материала
Worldwide
InternationalEnglishEnglishMundoEspañolSpanish
Europe
DeutschlandDeutschGermanFranceFrançaisFrenchΕλλάδαΕλληνικάGreekItaliaItalianoItalianČeská republikaČeštinaCzechPolskaPolskiPolishСрбиjаСрпскиSerbianLatvijaLatviešuLatvianLietuvaLietuviųLithuanianMoldovaMoldoveneascăMoldavianБеларусьБеларускiBelarusian
Transcaucasia
ԱրմենիաՀայերենArmenianАҧсныАҧсышәалаAbkhazХуссар ИрыстонИронауОssetianსაქართველოქართულიGeorgianAzərbaycanАzərbaycancaAzerbaijani
Middle East
Sputnik عربيArabicArabicTürkiyeTürkçeTurkishSputnik ایرانPersianPersianSputnik افغانستانDariDari
Central Asia
ҚазақстанҚазақ тіліKazakhКыргызстанКыргызчаKyrgyzOʻzbekistonЎзбекчаUzbekТоҷикистонТоҷикӣTajik
East & Southeast Asia
Việt NamTiếng ViệtVietnamese日本日本語Japanese俄罗斯卫星通讯社中文（简体）Chinese (simplified)俄罗斯卫星通讯社中文（繁体）Chinese (traditional)
South America
BrasilPortuguêsPortuguese
NewsfeedBreaking
15:07 GMTEU Commission Chief Announces Launch of Competitor to China’s Belt and Road
14:51 GMTEU Not Informed About New US, UK & Australia Alliance, Plans ‘to Assess Implications’
14:48 GMT'BJP's Politics Behind 96% Jump in Communal Riots in India', Says Opposition Congress
14:46 GMT‘No Friend of China’: As Raab Exits Stage Left, What Will UK Foreign Policy Look Like Under Truss?
14:34 GMTSouth African Child Maintenance Payments Delayed by Ransomware Attack
14:34 GMTEuropean Gas Futures Fall Below $750 Per 1,000 Cubic Meters
14:29 GMTIs the Age of the Car Over as Politicians Around Europe Declare War on the Motorist?
14:29 GMTMessage for India? AUKUS Announcement Sparks Debate About Relevance of Quad, Reliability of US
14:15 GMTBlack Market Business for Foreign Visas Skyrockets in Afghanistan, Reports Say
13:29 GMTSequoia National Park in California Closes Due to Massive Wildfire, Administration Says
13:28 GMTRussia Threatens to Take Measures Against US Over Interference in Elections, Foreign Ministry Says
13:28 GMTCricketer Virat Kohli Confirms He Will Step Down as India's T20I Captain After ICC T20 World Cup
13:22 GMTShell Touts Plans for One of Europe's Largest Biofuel Plants
13:16 GMTWomen's Average Salary in Saudi Arabia Has Exceeded That of Men for the First Time, Report Says
13:10 GMTNo More Words: Microsoft Allows Use of Facial Recognition or Fingerprints Instead of Password
12:50 GMTNew Zealand Being Left Out of AUKUS Shows Canberra, Wellington 'Going in Very Different Directions'
12:14 GMTBiden Went For Full Afghanistan Pullout Despite His Cabinet's Advice, Book Claims
12:04 GMTChina Plans to Launch Experimental Reactor That May Revolutionise Atomic Energy Industry
11:26 GMTFrance May Demand Compensation From Australia for Submarine Deal Breach, Defence Minister Says
11:22 GMTKremlin Regrets European Parliament's Russia Report