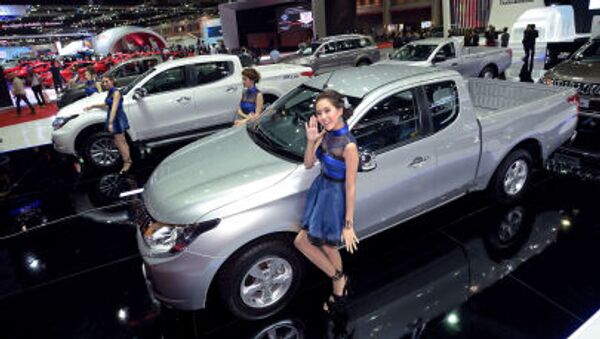 © AFP 2021 / Pornchai Kittiwongsakul
Subscribe
The car industry is being accused of burying a report claiming U.S. cars are less safe than European Union vehicles, over fears that the findings would hamper negotiations between the two regions over the Transatlantic Trade and Investment Partnership deal (TTIP).

According to Digital Journal, the findings indicate U.S. cars are particularly unsafe when it comes to front-side collisions which commonly lead to serious injuries. The website states these findings were not publically announced by bodies that funded it, which include organizations representing brands such as Chrysler and Toyota.

Volkswagen CEO Martin Winterkorn Resigns Amid Emission Scandal
The study was commissioned in 2014 and sponsored by the Washington-based Alliance of Automobile Manufacturers (AAM). It was conducted by researchers from the University of Michigan Transportation Research Institute and the Safer Transportation Research Centre at Chalmers University of Technology in Gothenburg, Sweden.

The AAM stated in 2013 that regulatory differences between the U.S. and E.U. "can act as non-tariff barriers to trade," translating into higher costs for consumers.

The study was initially commissioned to back the notion that vehicle safety standards are similar between the two regions – a case that would support the TTIP agreement, which analysts say could be the biggest such deal ever made.

"The car industry is hoping to be one of the biggest beneficiaries from a TTIP agreement, partly by removing tariffs on imports, but mainly by removal of so-called non-tariff measures.”

The report may stall this agreement.

"The results of our study indicate that there is currently a risk difference with respect to the risk of injury given a crash between E.U. specification cars and U.S. models," said Andras Balint, a co-author of the study. "Therefore, based on these results, immediate recognition of U.S. vehicles in the E.U. could potentially result in a greater number of fatalities or serious injuries in road traffic. The potential impact is difficult to quantify because it depends on a number of other parameters."

The next official round of negotiations over the TTIP deal is set for next month.

000000
Popular comments
And since when where the u.s cars safe or any good? Bigger is better mentality, so you think they look good and that's where it stops with just a few miles on a gallon and boy do they rust before your eyes and not to mention their electrical issues. Just having some cool lines, bling bling here and there and spoilers does not make a car any better!