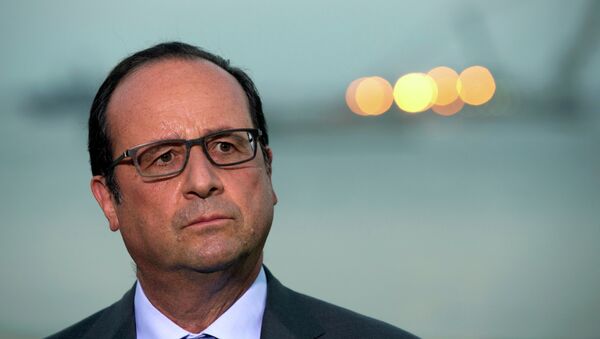 © AFP 2021 / Philippe Wojazer
Subscribe
Francois Hollande said that France is open for discussion of the Syrian conflict resolution with the conflicting sides, as well as with the United States, Russia and Iran.

Int'l Community Should Talk to Syrian Government to Solve Crisis - Dutch FM
UNITED NATIONS (Sputnik) — France is open for discussion of the Syrian conflict resolution with the conflicting sides, as well as with the United States, Russia and Iran, the French president said Sunday.

"The position of France is to discuss this [Syrian conflict resolution] with all the parties involved. First of all, with Syria’s neighbors, Arab countries, as well as with the United States, Russia and Iran. We do not leave anyone aside," Francois Hollande said at a press briefing at the UN headquarters.

The Syrian civil war is entering its fifth year and has claimed the lives of up to 330,000 people, according to the Syrian Observatory for Human Rights’ August 2015 estimates.

000000
Popular comments
France the UK and Germany, simply puppets of the US... the US simply a puppet of Israel. France bombing Syria in self defence ? So when did Syria attack France? Did I miss something what a f***ing joke! Do these so-called "leaders" think everyone is as stupid and gullible as they are? What moronic idiots, I am so sick of all their lies and deceptions it's really disgusting!!! I wish they would all die off like the dinosaurs they are!

rodneswicksculptor
28 September 2015, 01:24 GMT2
000000
france Ready to Discuss Syrian Conflict Settlement With us, Russia, Iran??? So first you go bombing Syria than the day after you want to discuss??? Man, everytime it amazes me how much stupidity comes out of these ***(what are they)*** pfff