Smoke and Mirrors: Numerous Facts Prove US is Sinking in Poverty 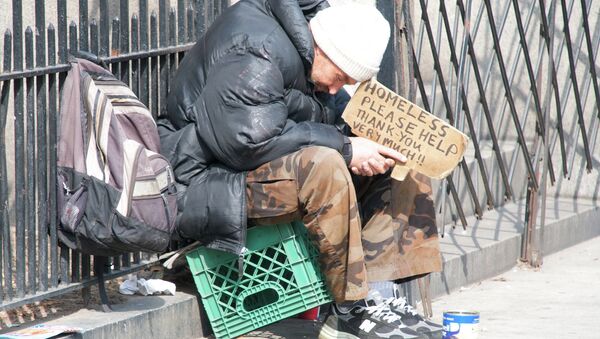 © Flickr / Ed Yourdon
Subscribe
Many people are still viewing the United States as a country where most of the population lives in prosperity. However, “The Economic Collapse Blog” released a number of facts that prove that the economic situation in United States is far from ideal.

Many people want to go to America in search of better life and to fulfill their dreams. However, the United States that was once seen as a stronghold of freedom and numerous opportunities has turned into a place where financial elites run the show and turn the country into their personal private army, Marco Maier wrote in Contra Magazine.

US Should Raise Minimum Wage to Fight Spread of Poverty - Advocacy Group
The money is being invested into the military apparatus and the intelligence services so that a small upper class can advance its international business. The majority of the population, however, is increasingly sinking in misery, the journalist argued.

Maier referred to "The Economic Collapse Blog" to prove his point of view and cited a number of facts that demonstrate the poor economic situation in the United States.

Five of the facts (though there are many more of them) are listed below:

A recent study revealed that 40 percent of Americans have $ 500 or less in savings.

Another study found out that 28 percent of all Americans do not have a single cent of savings in case of emergency.

Nearly 10 million US households don’t even have a bank account. That is one million more compared to 2009.

Since the last recession, the number of homeless families rose by 23 percent in Washington DC which used to be one of the richest regions in the country.

The number of Americans living in poverty rose in the last four years to 6 million people.

According to Maier, the US economic conditions are deteriorating, with more and more people likely to live in poverty in the future. Do Europeans really want to closely cooperate with the country where a few billionaires continue to grip money, while their "private army" in the form of the US Armed Forces is inflicting chaos worldwide? the journalist asked.

000000
Popular comments
There are millions waiting in hope of a collapse. Reason being, they won't feel alone, something will be done to start this world anew- without the corruption and greed and hate and that their children will live in a better future. Or perhaps many welcome death over the horrendous day after day living in such a world of hopelessness.
wconell
28 September 2015, 21:39 GMT1
000000
Fact 6: Government agencies have purchased enough gun ammunition to fight world war 3 but it is intended for use within the country.