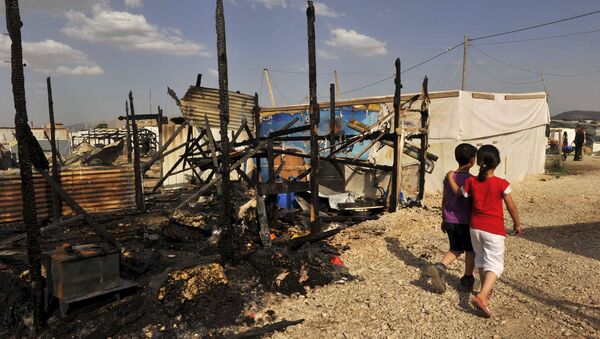 © REUTERS / Hassan Abdallah
Subscribe
International
India
Africa
The Lebanese prime minister said that his country had spent almost one-third of its GDP on refugees, which "had a devastating impact on the economic development" of the country.

UNITED NATIONS (Sputnik) — The refugee crisis in Europe is a consequence of an inadequate response to the Syrian conflict, Lebanese Prime Minister Tammam Salam said Saturday.

"The refugee crisis that Europe is facing today is a direct result of an inadequate response [to the Syrian conflict]," Salam said in a statement at the UN Sustainable Development Summit.

Why Don't Gulf Arab 'Friends of Syria' Take in Any Refugees?
According to Salam, Lebanon, the smallest country in the region, has taken in over 1.2 million Syrian refugees so far.

The four-year-long Syrian civil war forced over 4 million people to flee the country to neighboring Jordan, Lebanon, Turkey, Iraq, and Egypt, according to the UN data.

Lebanon has spent over $7 billion to support refugees over the last four years, according to internal record keeping, while the country's external debt amounts to about $70 billion.