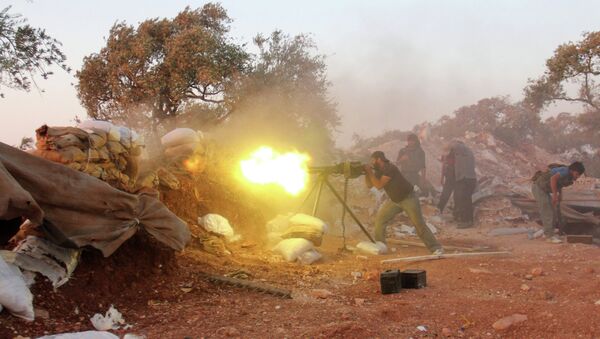 BEIRUT (Sputnik) – Earlier this week, it was reported that a temporary ceasefire in the Syrian towns of Fua and Kefraya was set until Saturday.

"The evacuation has begun only in Fua so far. The column with a small number of citizens headed to Hama, accompanied by cars of the Red Cross and Red Crescent. There they will be met by representatives of Hezbollah," the source stated.

The source added, the first column is a "trial" one. If people reach the destination without any problems, the first group of terrorists will be released from the encirclement in the town of Zabadani, a Damascus suburb.

Syrian Army, Rebels Agree on Six-Month Truce for Three Towns
It is expected that a total of 10,000 residents of Fua and Kefraya will be evacuated within 10 days. In return, the Syrian forces and fighters of the Hezbollah Lebanese movement will allow a group of 512 fighters to leave Zabadani. Meanwhile, one of the jihadists’ conditions is the prohibition to evacuate young men older than 14 and men under 50.

Twice, in late August and in early September, a ceasefire was declared to halt fighting between the Syrian militants and the army in Zabadani near the Lebanese border. However, the truce was violated by the terrorists.

Syria has been in the state of civil war since the 2011 political collapse. Government forces have been fighting on multiple fronts against opposition forces and numerous extremist militant groups, including Islamic State and the Nusra Front.