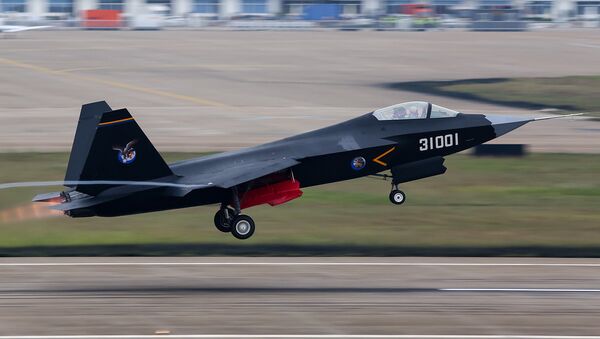 © Wikipedia
Subscribe
China’s new J-31 fighter has raised speculation about the American-made F-35 Joint Strike Fighter. The website Defense One compared the two fighter jets to see which one has the advantage: America or China?

China’s J-31 fighter jet design has a striking resemblance to the single-jet F-35. But according to the data which was firstly published by military magazine Janes, The US F-35 can fly slightly farther and carry a heavier load of weapons.

Chinese Symbols: What Message was Beijing's Military Parade Sending to the World?
Military experts also pointed out that the F-35 has a better computer software, unique sensors and other hardware, stealth coating, and engines technology. These attributes make fifth-generation aircraft different than the military jets of last century.

But the senior Pentagon officials and experts believe America’s technology superiority is shrinking.

“[W]e were depending more so on the [American weapons] having that generation-ahead edge and if we don’t have that generation ahead edge that is incredibly scary for us in various scenarios,” Peter Singer, a strategist and senior fellow at New America said, Defense One reported.

US Deputy Defense Secretary Robert Work and Acquisition Chief Frank Kendall have been warning for the past two years that the US military’s technology advantage is wearing down.

US May Deploy Next Generation F-35 Jets in 2016 - Air Force
In 2011 it became known that China was building a multirole, stealth fighter of its own that could strike targets in the air and on the ground, like the F-35. The J-31 flew for the first time in 2012.

The Chinese continue to invest into the R&D of future fighter jets and it now plans to construct the J-20 stealth fighter being built to rival the F-22.

Although America’s fighter jet development program will end in 2017 it will transition into a ‘follow-on development’ phase allowing it to go through upgrades and required changes.

As Defense One concluded, while the Chinese jet fighters might still be inferior to the American plane, not having to do early research and development allows them to focus on upgrades and improvements.