Europe's Refugee Plan: Papering Over the Cracks as Divisions Deepen 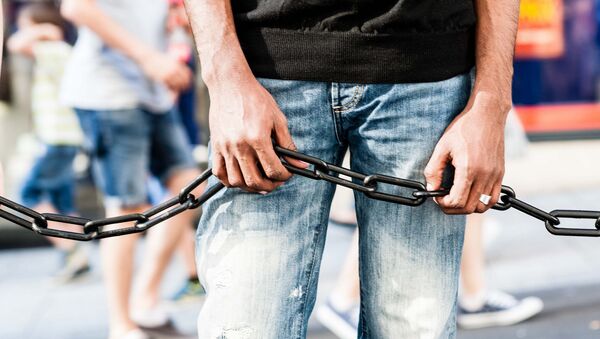 © Flickr / Gustave Deghilage
Subscribe
The late night deal brokered in Brussels to throw billions of dollars at the refugee and migrant crisis may not prevent a huge rise in right-wing extremism and the worst is "yet to come" according to a senior figure.

Europe has been paralyzed by the upsurge in migrants and refugees fleeing the Middle East and Africa, with countries within the EU sending mixed signals for months as the crisis deepened. The late-night deal reached Wednesday night was delivered as a show of solidarity, but it quickly emerged there were cracks behind the scenes.

Euro Summit: we need to make sure that we all understand each other's positions & the consequences of our decisions. http://t.co/DszfHjUmYK

Donald Tuck, President of the European council took a clear swipe at European Commission President Jean-Claude Juncker and German Chancellor Angela Merkel, when he said, following the announcement of the deal:

"The greatest tide of refugees and migrants is yet to come. We need to correct the policy of open doors and windows."

This was a clear rebuke to the German leader who had said Germany would open its doors to refugees and migrants and was prepared to take in 800,000 this year alone. Juncker too has been vocal in encouraging people to move out of refugee camps and make the dangerous journey to Europe.

"Today we are talking about millions of potential refugees trying to reach Europe, not thousands. It is likely that more refugees will flow towards Europe. Especially as almost all of them feel invited to Europe," he said, in a clear reference to Merkel.

The news that Germany was open for business spread like wildfire on social media and many left the refugee camps in places such as Lebanon and Jordan. The mass influx created chaos in Greece and Italy which could not cope with the numbers and became quickly overwhelmed.

Proper management & control of our external borders is our common responsibility; unfair to put all the burden on Italy or Greece. #EUCO

Other routes opened up across the Balkans forcing Hungary to erect a razor wire fence, Austria to introduce border controls with Hungary and Germany to introduce controls with its border with Austria. There followed clashes on the Croatia-Hungary border and unrest in other major cities as railways and roads were temporarily closed.

The Schengen agreement of freedom of movement within most of Europe was broken, leaving countries arguing over what action to take, with Merkel and Juncker demanding refugees be re-settled with a binding quote system.

"Without changing the current paradigm the Schengen area will only exist in theory," said Tusk.

Meanwhile, the Dublin rules — which require asylum seekers to be processed at the country of entry and that any found deeper in Europe be sent back to that point of entry — were being broken by Germany.

The deal finally agreed after weeks of disarray means the EU will pay US$1.11 billion to international agencies to support refugee camps and more money and aid for Turkey, Jordan and Lebanon, which have become safe havens for the 4 million Syrians who fled the civil war.

Relocation alone will not be enough to stabilize the refugee situation in Europe http://t.co/K71Sg5RgdR pic.twitter.com/sEVQVUHI18

The deal also involves beefing up Frontex, the border management agency and setting up 'hotspots' to help create reception centers in the countries most exposed to arriving asylum seekers.

However, the UN refugee agency, UNHCR, warned that the measures taken so far were not enough. Ahead of the leaders' summit Wednesday night, the UN High Commissioner for Refugees António Guterres said:

"This is a crisis of political will combined with lack of European unity that is resulting in management mayhem."

In a sign of the seriousness of the deep divisions within Europe, Tusk warned: "The most urgent question we should ask ourselves tonight is how to regain control of our external borders.

"Otherwise it doesn't make any sense to even speak about common migration policy. What is at stake is also the future of Schengen, the sense of order in Europe and the common European spirit."

000000
Newsfeed
0
New firstOld first
loader
LIVE
Заголовок открываемого материала
Access to the chat has been blocked for violating the rules . You will be able to participate again through:∞. If you do not agree with the blocking, please use the feedback form
The discussion is closed. You can participate in the discussion within 24 hours after the publication of the article.
To participate in the discussion
log in or register
loader
Chats
Заголовок открываемого материала
Worldwide
InternationalEnglishEnglishMundoEspañolSpanish
Europe
DeutschlandDeutschGermanFranceFrançaisFrenchΕλλάδαΕλληνικάGreekItaliaItalianoItalianČeská republikaČeštinaCzechPolskaPolskiPolishСрбиjаСрпскиSerbianLatvijaLatviešuLatvianLietuvaLietuviųLithuanianMoldovaMoldoveneascăMoldavianБеларусьБеларускiBelarusian
Transcaucasia
ԱրմենիաՀայերենArmenianАҧсныАҧсышәалаAbkhazХуссар ИрыстонИронауОssetianსაქართველოქართულიGeorgianAzərbaycanАzərbaycancaAzerbaijani
Middle East
Sputnik عربيArabicArabicTürkiyeTürkçeTurkishSputnik ایرانPersianPersianSputnik افغانستانDariDari
Central Asia
ҚазақстанҚазақ тіліKazakhКыргызстанКыргызчаKyrgyzOʻzbekistonЎзбекчаUzbekТоҷикистонТоҷикӣTajik
East & Southeast Asia
Việt NamTiếng ViệtVietnamese日本日本語Japanese俄罗斯卫星通讯社中文（简体）Chinese (simplified)俄罗斯卫星通讯社中文（繁体）Chinese (traditional)
South America
BrasilPortuguêsPortuguese
NewsfeedBreaking
06:48 GMTScania Scandal: Swedish Carmaker Investigated for Bribery Over Deal With Indian Minister
06:37 GMT25 Injured After Explosion in Residential Building in Gothenburg, Sweden, Reports Say
06:13 GMTGerman Chancellor Candidates in Focus as Tough Coalition Talks Loom
05:53 GMTBrexit to Blame: Germany's Olaf Scholz Says 'End to Freedom of Movement' Fueled UK Petrol Crisis
05:37 GMTUK Motorist Runs Over 'Knife-Wielding' Man Amid Alleged Petrol Dispute - Video
05:23 GMTPatriarchy Strikes Back? Iceland's Historic Female-Majority Parliament Up in Smoke After Recount
04:43 GMTUS Marine Colonel Put in Brig For ‘Asking for Accountability’ Over US Departure From Afghanistan
04:03 GMTWitness Who Claims She Saw Prince Andrew Dancing With Giuffre at Club to Testify in Court - Report
03:24 GMTBennett Claims He Said 'No Three Times’ to President Biden During Their August Meeting
03:16 GMTRepublicans Slam DHS Chief Mayorkas for Allowing Thousands of Haitians Into US
01:37 GMTUS ‘Humiliated Like Never Before’, Trump Says, After DHS Allowed Thousands of Migrants to Pour in
01:31 GMTLockheed Martin to Build US Army’s Next Generation Tactical Vehicle Based System
01:10 GMTBorder Patrol Agents Disgruntled Over Biden's Attempts to Throw Them 'Under the Bus' - Report
00:53 GMTBeard-Check: Afghan Barbers Banned From Shaving, Trimming Beards - Reports
00:27 GMTR. Kelly Found Guilty: Will Artist Be Removed From Music Services?
00:03 GMTIs Sir Alex Ferguson Right, That Ronaldo, and not Messi, Could Score a Hat-trick for Anyone?
00:00 GMTUS Senator Menendez Urges New Sanctions on Turkey if It Acquires More Russian Weapons
YesterdayInsurgents Who Detained President of Guinea Declare Transitional Charter - Reports
YesterdayTexas Lawmakers Propose New Congressional Districts in Cities of Austin, Houston
YesterdayIOM Looking for Alternatives for Haitians at US Border, Brazil Being 1 Option - Sources