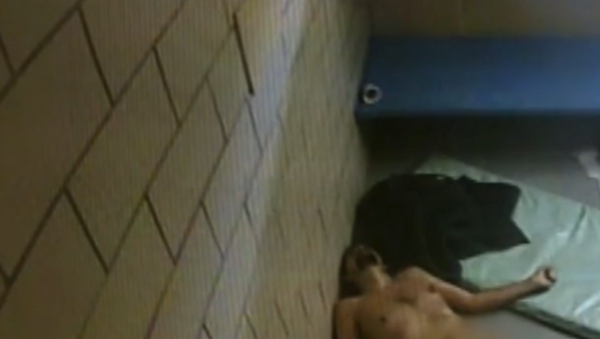 © Click on Detroit
Subscribe
A disturbing video has just surfaced showing a man dying behind bars in a Michigan jail, where he was imprisoned over a $772 fine for “careless driving.” The family is fighting for justice.

Sheriff Releases Graphic Video of Schizophrenic Woman Killed in Custody
David Stojcevski, 32, died in Macomb County Jail in June of last year after being sentenced to 30 days for an obstruction of justice charge stemming from the unpaid fine.

From June 11 through June 27, Stojcevski lost 50 pounds and ultimately died in the medical unit of the jail from benzodiazephine withdrawal when corrections officers failed to administer his prescribed medication.

He died alone, writhing in pain, and his last breath was captured in the footage.

“Like an animal, he’s crawling underneath something to die,” addiction expert Diane Rockwell told CBS as she reviewed the security footage.

“All of the named defendants herein were so deliberately indifferent to David’s mental health and medical needs that the defendants, named and unnamed in this litigation, monitored, watched and observed David spend the final 10 days of his life suffering excruciating benzodiazepine withdrawal symptoms,” the suit claims.

The family has not disclosed the amount they are seeking, other than the fact that it is a “substantial amount.”

The lawsuit claims that jail officials knew about Stojcevski’s medications, including Xanax and methadone, and knew there was a potential for him to go through dangerous withdrawals.

Number Three: Another Black Woman Found Mysteriously Dead in Police Custody
On June 17, during one of several times that he was moved between a jail cell and the mental health unit, they noted that he was hallucinating and talking to himself.

Four days later, Stojcevski asked when he would be receiving his medication, and the jail informed him that none had been ordered for him.

Stojcevski would be dead less than a week later.

The final ten days of his life were spent in excruciating agony from the withdrawal symptoms, the lawsuit says.