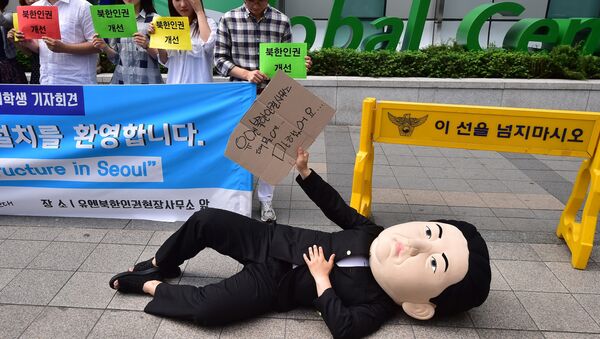 © AFP 2023 / JUNG YEON-JE
Subscribe
International
India
Africa
A new United Nations office in the South Korean capital of Seoul will focus on reports of crimes against humanity in North Korea, including a sprawling network of political prisons, the head of the office told The New York Times on Wednesday.

Asia
Olive Branch? US Envoy to North Korea Ready for Talks in Pyongyang
MOSCOW (Sputnik) — Refugees and defectors from North Korea have spoken of torture and starvation in four massive camps said to hold between 80,000 and 120,000 political prisoners, according to UN data cited by the US outlet.

UN office head Signe Poulsen arrived in Seoul in August after serving as human rights adviser in Papua New Guinea. She vowed to keep the issue of human rights violations by Pyongyang on the UN agenda.

North Korea dismissed accusations that it routinely commits crimes against humanity at a panel discussion in Geneva on Monday, stating that the allegations are a conspiracy.

Pyongyang criticized the the move to create a UN office in Seoul. North Korea consistently denies requests by UN officials to visit the country.